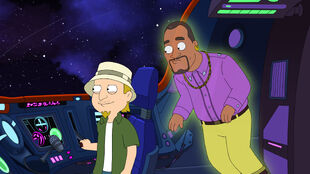 A couple of far-out space nuts

The Longest Distance Relationship
Hayley meets someone new as it is discovered Jeff is still alive. 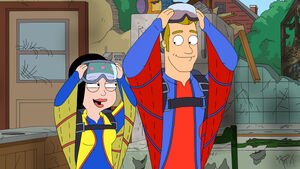 After an incident with Steve in Iran, Francine expresses concern that Hayley is moping due to the one-year anniversary of Jeff's abduction due to Roger. Francine tries to get her to perk up without luck. Francine proposes a therapist but Stan decides to smoke her out instead, setting the house on fire. Hayley lands in the hospital, she sees two doctors making fun of a janitor and shames them into leaving him alone. The janitor turns out to be Matt, a millionaire who takes on odd challenges to experience life. They hit it off and he invites her to join in some of his adventures. Skydiving into the house, he impresses the family, and brings them a new house. 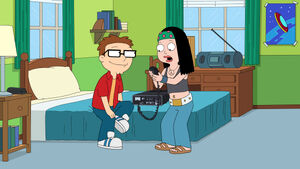 Meanwhile, Steve finds a CB radio and takes it to Snot where they play with it until they discover a girl who is willing to chat with them but lose the signal. Steve discovers Jeff on the air and tells Hayley. She follows the tale of his adventures and tells the family, but learns he has no idea how to get home. Stan objects, wishing Hayley to stay with the millionaire. Despite the distance, Jeff is determined to make the long-distance relationship work. As they share messages, she ignores messages from Matt. Reluctant to lose Matt, Stan and Roger try to hook Matt up with one of Roger's personas without luck.

Francine also tries to get Hayley to move on, skeptical about Jeff's return. Realizing that she might be right, depression starts to get to Hayley. On a date with Matt, he invites her to travel around the world with him and she agrees, but is unable to tell him about Jeff. She tries tell Jeff that she is ready to move on but Jeff announces that they have found a wormhole that would take them home and Hayley agrees to wait for him. Passing through the wormhole, they land home 60 years in the future. Catching up with what happened, Jeff finds that Francine is a hideous patchwork, Steve and Snot are permanent partners, Roger is the father of two adopted black men and Stan is an ape who still holds a grudge over Hayley not marrying Matt. She has a heart attack and lands in the hospital where Jeff meets Matt who is still working as a janitor. Saddened that he ruined her life, Jeff leaves for space again and heads back through the wormhole. On the other side, Jeff talks to young Hayley and tells her not to wait for him, releasing her to better herself. Roger rushes in to tell of running over a black woman with two kids and Matt sees him, as Roger kills him out of fear of having a witness and talks Hayley into taking that trip that Matt had planned.