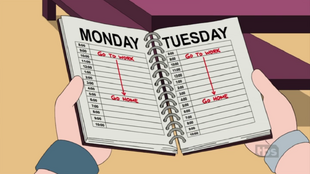 The Long March
Jeff and Hayley turn to a life on the highway. 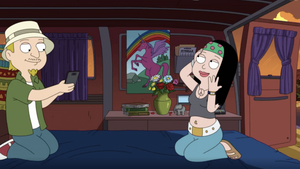 When one of Hayley's co-workers commits suicide on the job, she is promoted to assistant manager. Stan's happy vision of it being a long slog to a grave doesn't help matters any. Faced with a lifetime in a lousy job, she quits to go on the road with Jeff. However, they quickly find that Roger has tagged along, and presenting himself as an agent, offers to get them sponsorships to pay for their excursion. When the money does start rolling in, Jeff finds that it is more of a job than he bargained for and quits. 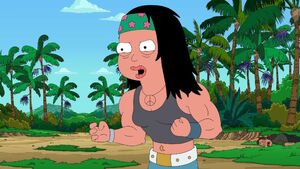 Hayley continues without Jeff in front of fake backdrops from their sponsor, but they eventually decide to replace her as well and send her to Brazil. When she gets there, she finds it's a slave farm picking Açaí berries. While starving, she tries to eat one and is said upon by guard monkeys and thrown into a death trench. She climbs out and finds that Jeff has come for her, but he smashes into the side of a storage tank of the berry juice. However, this causes the tank to leak, and they soak up the full superfood juice, healing their wounds and gaining strength. They overcome their captors and manage to escape, where Hayley resumes her old job, although she's forced to wait until Jeff returns to normal. 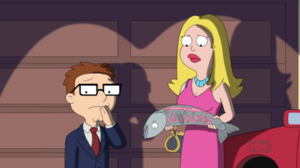 Meanwhile, Francine and Steve experience a bad ride with an Uber driver. Not wanting to give him only one star and get him into much trouble, they decide to give him four stars. But when they try to get a ride to a Billy Joel concert later, they find he's their driver no matter what company they switch to. When Klaus brings him in to assemble his Ikea bookshelf, they fear for their lives. But when there is a washer left over, Klaus berates him and keeps deducting stars from his rating. Francine and Steve take the opportunity to escape while he is distracted in cutting Klaus' throat.

Retrieved from "https://americandad.fandom.com/wiki/The_Long_March?oldid=85140"
Community content is available under CC-BY-SA unless otherwise noted.