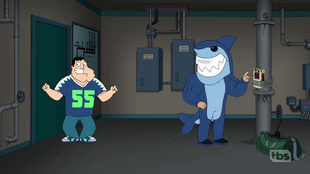 The Long Bomb
Stan and Hayley try to stop a terrorist plot. 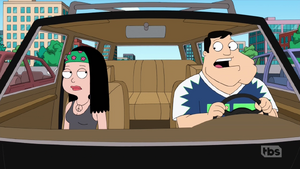 During opening day of The Langley Falls Bazooka Sharks football season, Shark's Nest arena is taken over by thieves as Stan and Hayley find themselves uncomfortable of each other's company as Francine, Klaus and Steve elect to stay home. Stan tries to break away from her under the pretense of getting refreshments, but a passing hot dog vendor and a seat neighbor with a spare beer interrupt his getaway, although he finally gets his chance under the pretense of getting a keychain. Roger, in persona as an 'escort,' finds himself on the owner's box as the thieves arrive and kill the team owner, informing the rest of the guests that they have placed bombs around the arena and will set them off if anyone tries to spread the word before they can crack the safe. 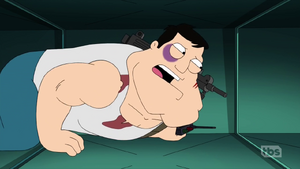 While holding up the line at a concession stand, Stan spies Dwight the Great White, unaware that he is one of the terrorists in disguise and follows him to a utility room, demanding a dance. He quickly discovers the ruse and disposes of the thief, while Hayley ponders his disappearance. She goes in search of him and is captured by more of the thieves, as Stan works his way through the duct work. Answering the leader's radio transmission, he finds that Hayley has been taken to the owner's box with the others. When the thieves are distracted by the arrival of a food cart, Hayley passes a warning note about the presence of other bombs in the building to the attendant to give to Stan. The stadium vendors spread the word and Stan finds out about a bomb hidden in the rafters. Sky Crooner is able to point it out to him, but bails out on watching his back. When another one of the thieves arrive, Stan is able to send him crashing down onto the field. However, the lead thief expositions to one of his men that there are multiple bombs hidden throughout the arena. Hayley spies the map of the bombs and gets word to Stan of more locations with the help of Roger pranking the stadium announcer. 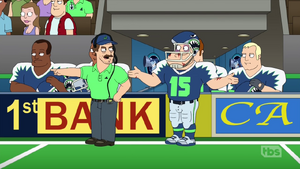 Leaving a host of dead thieves in his wake, Stan locates almost all of the bombs, but when he finds out that the last one is located on the visitor's goalpost, he takes over as quarterback for the Bazooka Sharks. A series of good luck calls and an unexpected field goal fake allow Stan to disarm the bomb, but Hayley gives herself away when she celebrates his success. When informed of her danger, Stan surrenders himself to the thieves. He reveals that he taped the bombs to his chest to force their surrender, but finds out that the bombs were faked with creme cheese. They breach the safe where it turns out they were after the final game jersey worn by Johnny Concussion, the late star quarterback of the team. Dismissing the idea of selling it, the leader puts it on and reveals himself to actually be Johnny Concussion, out to get revenge for almost getting kicked off the team due to brain damage. Hayley tosses a platter which results in Johnny taking out the last of his men and he flees, heading toward the roof with Stan in pursuit. Roger tries to get one of the rich owners to provide him with a 'baby' that they can support, but opens up the retractable dome while bending over the control panel as Johnny, Stan and Hayley rush through a roof hatch. Tossing footballs kept as trophies, Stan catches them and goes back to fire a deep one to Johnny, who tries to leap the gap in the roof and barely makes it. Enigmatically noting that the fans would be blown away, Johnny tries to fly away with a hang glider, but Stan's football toss knocks him off as he falls to his death. Standing above, Stan and Hayley observe the beginning of a memorial celebration for Johnny and realize that his 'ashes' are a real bomb on the field. Despairing of reaching the field in time, Sky Crooner arrives and drops them down via his bungee cords. They find that the bomb is hooked to a decibel meter, set to go off as the crowd has a moment of silence. They desperately resort to random talking to keep the noise up, revealing personal feeling and details. They succeed, but are beaten up following the moment of silence for failing to show the proper respect.

As the camera pans in on Johnny's body, his eyes open and he remarks that he always gets up.

Retrieved from "https://americandad.fandom.com/wiki/The_Long_Bomb?oldid=90252"
Community content is available under CC-BY-SA unless otherwise noted.