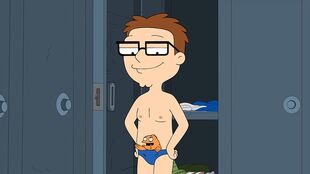 Roger's Disguise: Uncle Kappy from "There Will Be Bad Blood" 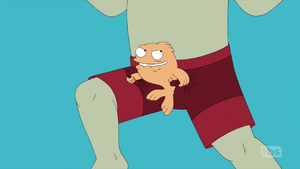 Steve is distracted at school, admitting to his friends that he desires to make female friends and decides to become a varsity athlete on the water polo team. However, he finds he is cut from the team to make room for a handicapped student. Sharing the news at home, Klaus offers to give him some tips. Irritated with his style, Klaus grabs Steve's pubic hairs and maneuvers him into performing as desired. As a result, he makes the team after all.

In his first match, Steve quickly becomes a standout and even his mom becomes a hit with the cool kids' mothers. As a reward for winning, the kids plan a trip to Raging Waters, disappointing Snot when Steve considers Klaus his new best friend. Steve continues to rack up victories, attracting a girl on the school newspaper. Klaus finds the article doesn't mention him and becomes angry to find he is left out in favor of Steve's new female friend. Preparing for their final match, Klaus refuses to help Steve and he quickly finds he doesn't have any skill at all. As Klaus taunts him from a pool drain, he whiffs a shot and starts to drown. He dreams he has switched places with Klaus who takes out his girl. As he lies on the bottom of the pool, Klaus leaps in and gets him to the surface and he realizes he needs to introduce Klaus to the public, but his intentions are misconstrued as exposing himself. 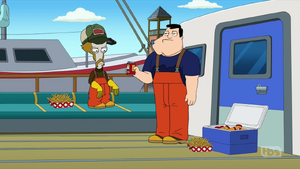 Meanwhile, Stan takes Roger to a CIA auction. When a sailboat becomes available, Roger bids and wins. With Stan and Roger each having a different vision for their adventure, Stan finds he has to go along. On the water, they drink and work, but when the beer dries up, a neighbor in another boat makes friends. The work gets to Roger, topped as well by the expenses. They are told by their new friend that the boats don't sell because most people realize what a pain they are and decide to destroy the boat for the insurance. They invite Jeff to take the boat out but when Hayley tags along, Stan has second thoughts about the plan. As they sail off, the boat sinks within feet of the dock, but Roger failed to buy the insurance. As Hayley notes that the life jackets seemed to be filled with sand, Roger slices hers open to find it full of cocaine as Stan puts them all under arrest.

Previous Episode /// The Life Aquatic With Steve Smith \\\ Next Episode

Retrieved from "https://americandad.fandom.com/wiki/The_Life_Aquatic_With_Steve_Smith?oldid=89233"
Community content is available under CC-BY-SA unless otherwise noted.