The Last Ride of the Dodge City Rambler 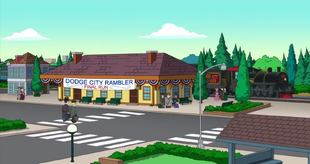 The Last Ride of the Dodge City Rambler
The Smiths take a trip on a hijacked train. 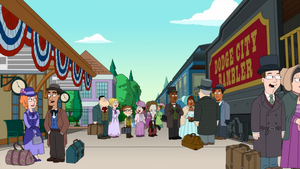 When Steve reads in a book that Stan got him that an antique steam train is about to make its last run to Dodge City, Francine proposes taking a trip to visit her Aunt Karen, whom Stan despises. With the passengers dressed in 1880s clothing and actors for entertainment, the family is surprised when Aunt Karen meets them to ride the train back home. Desperate to get out of the trip, Stan slips off the train during a stop and intentionally misses it, but when the engineer is shot and dies in his arms, he finds the 'train robbers' are real. 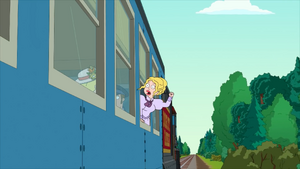 As Stan sets out in pursuit, the robbers find they have a dilemma that without the engineer, they have no one that knows how to operate the train. But when they overhear Steve spouting facts from his book, they trick him into running it for them. Stan catches up, but Francine refuses to listen to him. Stepping between cars to ponder his next move, he discusses his dilemma with a stranger who turns out to be a gang member and knocks him out. When he comes to, he finds he's been chained up and the gang intends to ram the train into the railroad headquarters. Even worse, they chain Aunt Karen up with him. The hijackers reveal that they are the descendants of the original land owners who were cheated by the railroad company. As they leave Stan and Karen alone, he uses Karen's oxygen tank to make a blow torch to cut their chains. 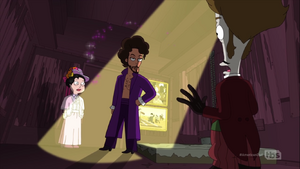 Meanwhile, Roger and Hayley are convinced a passenger is actor James Cordon, despite his denials. When they confront him, they find that he's really Prince, who had faked his death. When they hear shooting outside from one of the hijackers celebrating the imminent crash, Prince takes off. With a marble from a bag that Stan picked up when he left the train and Karen's oxygen tank, they place the tank at the edge of the firebox and uncouple the cars, hoping to use the marble to knock the tank in once they are clear. Unfortunately, the family distracts them at the critical moment and Stan can no longer take the shot. However, Aunt Karen takes the marble and makes the shot, blowing up the train just before it crashes into the railroad headquarters as the passenger cars slow to a stop. The remaining robbers are arrested, including one who is held by Prince dressed as a cop. As the family decides to stay with Aunt Karen, she collapses, gasping for air due to her missing oxygen tank as they agree to take her to a hospital first.