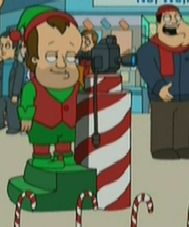 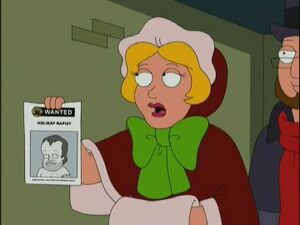 The Holiday Rapist appears in "The Best Christmas Story Never", dressed as an elf taking pictures of the kids with Santa. Later, a group of concerned citizens come to warn the Smiths but angers Stan, who insists on calling him The Christmas Rapist due to the fact he only attacks on Christmas, as well as Stan's growing annoyance of people using the term "Holiday" instead of "Christmas" so not to offend other religions.

In "Spring Break-Up", the Holiday/Christmas rapist is the jester who gives Roger the King of Spring-break Crown.

Retrieved from "https://americandad.fandom.com/wiki/The_Holiday_Rapist?oldid=72351"
Community content is available under CC-BY-SA unless otherwise noted.