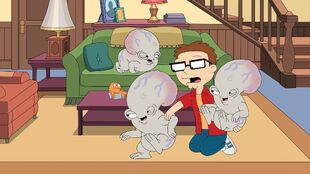 The Hand that Rocks the Rogu
Steve babysits Rogu. 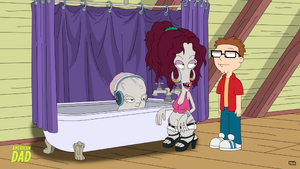 Slightly jealous of his friends after they have gotten babysitting jobs and can afford the curly fries at school, Steve tries to get a job of his own, but Francine rejects the idea, thinking he's not ready. When Roger decides he needs to operate his prostitute persona out of the house after Rogu deep-throats a tub faucet, Steve volunteers to work watching Rogu just to prove to Francine that he can handle it. But when he slips Rogu a piece of candy contrary to Roger's instructions, he coughs up more versions of himself. As Steve tries to get help, Klaus allows them to eat more candy, which increases their numbers. Trying to pacify them by playing a music video, they merge into a giant size Rogu and, distracted by the flashing sign at the Shark's Nest, heads out toward a Bazooka Sharks game where Francine is as part of her mom's club. 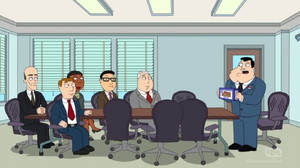 Meanwhile, when Stan receives an offer to join the CIA exotic food club, he embarrasses himself by bringing Entenmann's pastries. Trying to get something else from the store, Tom isn't helpful when he tries to find something exotic.

Stealing a boombox from Lewis and Buckle, Steve is able to lure Rogu back with a recording of Roger singing. Spying an amusement park Viking ship ride, he gets Rogu to climb in and fall asleep, which returns him to normal. However, the CIA arrives and takes Rogu away. Enlisting the help of Francine and her mom's club, they raid the CIA field headquarters and find that not only is it the CIA exotic food club, but they've eaten Rogu. Steve is able to get Rogu to reunite his parts, which results in a messy end for the leader of the group. Francine admits that part of the reason why she was resistant to Steve taking a job is a sign that he's growing up.

Stan finally arrives in the aftermath of Rogu's recovery with some oysters, but when Rogu swallows the entire can, he turns into a giant flying demon-like beast and takes off as Snot arrives, celebrating that the Bazooka Sharks won and he is now a sports fan.

Previous Episode /// The Hand that Rocks the Rogu \\\ Next Episode

Retrieved from "https://americandad.fandom.com/wiki/The_Hand_that_Rocks_the_Rogu?oldid=85232"
Community content is available under CC-BY-SA unless otherwise noted.