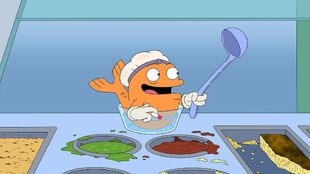 The Hall Monitor and the Lunch Lady
Steve becomes a hall monitor.

Roger's Disguise: H.J. Rimmens from "The Mural of the Story" 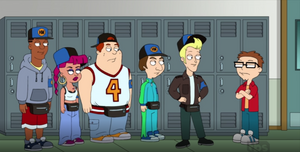 After Klaus is hired as a new school lunch lady, everyone becomes ill. Noting that Klaus was the eighth one fired and that there has been a rash of sickness, they investigate the kitchen and find sawdust stored everywhere. Steve and Klaus bump into detective Hank Turlington, who is also working undercover on the case as a female teacher and suspects a connection with the hall monitors that Principal Lewis appoints. With his help, Steve is sent to juvenile hall detention, where he becomes friends with the brother of head of the hall monitors and manages to join the crew after getting out. His work impresses the gang, so they introduce him to Principal Lewis, who tests him by having him vandalize a pet store. Only intending to free one animal, the monkey he chooses frees the entire store.

Steve begins to enjoy the feeling of power he has, but when asked to wear a wire when invited to a dinner hosted by Lewis, he reluctantly agrees, with Klaus along in his pocket. Lewis reveals that after having purchased a Christmas tree farm, he needed to find a way to make funds the rest of the year. Having increased the need for saw dust by making the kids sick, he decides next to poison the entire town. Back home, Klaus is thrilled that Lewis will get punished and he may get his job back. But when he steps out, Steve contemplates destroying the evidence tape. Klaus stops and convinces him to take it back to Turlington, where they find he has been killed and stuffed full of sawdust.

The hall monitors are invited out to Lewis' Christmas tree farm for the poisoning, but he also reveals that he knows there's a mole. Having taken Turlington's phone, he dials up Steve. Facing capture, Steve uses the power of his leg muscles that he built up while in juvie to leap over the gang and drink the poison himself. Klaus makes a timely arrival with the former lunch ladies and they rout the gang. Steve is saved by a salsbury gravy IV as Klaus informs him that Lewis got away. 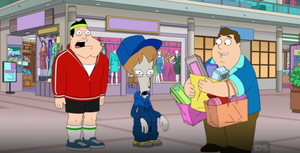 Meanwhile, Stan and Roger go into shock when they see Steve's tailor get sucked into an escalator at the Langley Falls Shopping Mall. Frozen stiff, they are returned home by security. After several days of this, Hayley and Francine are greeted by the timely arrival of Dr. Ray Petit, who suggests returning them to the mall. This fails to work as well, but when Dr. Ray is sucked into the same escalator, they go into shock as well.

Previous Episode /// The Hall Monitor and the Lunch Lady \\\ Next Episode

Retrieved from "https://americandad.fandom.com/wiki/The_Hall_Monitor_and_the_Lunch_Lady?oldid=83744"
Community content is available under CC-BY-SA unless otherwise noted.