View source
watch 02:40
'American Dad' Recap: The Golden Turd
Do you like this video?
Play Sound 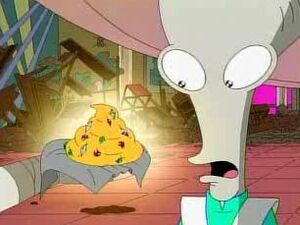 The Golden Turd is an ongoing mini-series within American Dad!.

It starts in "Homeland Insecurity", when Roger reveals that he poops golden, jewel encrusted turds. Mikey and Jim discover the gold left by Roger, and Jim kills Mikey. He hides the dead body in the back of his truck and drives away. He is stopped by a police officer, and fears he may have been discovered, but the police officer simply talks to him for a while and drives away. Then Jim stops at a gas station to call his fiancée, Abby, to let her know that they're now rich. The phone is answered by another man, and he learns that Abby is having an affair. The scene ends as Jim sobs in anguish.

In "Failure is not a Factory-Installed Option", we see Jim, who agonizes over the fact he killed his best friend for just a golden turd, then found out that his fiancée was cheating on him. He drives his truck onto the railroad tracks and gets hit by a train. Lt. Eddie Thacker and his partner come to investigate the accident and when Eddie sees the gold turd, he hides it from his partner and takes it home to his wife. They begin to speak of how it will pay for a great retirement and a house in Boca Raton, but Eddie regrets his decision and wants to take it back and face the consequences. He's a week from retirement and afraid that he might get fired if found out. They argue until Eddie starts to believe the gold is affecting them. The wife apparently accepts his decision, but when she starts making tea, she adds rat poison to his cup. Of note, in Spanish "Boca Raton" means rat mouth, a nod to the rat poison Eddie Thacker drinks.

The story continues in "Blagsnarst: A Love Story" where Marylin Thacker is executed for the murder of her husband. Her son, Vincent Edmonds returns to the family home in sadness as he prepares for an election as attorney general. As his son is hit by a car outside, he discovers a secret hiding place under the floorboards containing the Golden Turd. Ignoring everything else in his life, he calls Wyatt Borden, a wealthy chemical dumper that pledges to help him and even make him president one day.

As the political primary takes place in "Father's Daze", Vincent, now going by his family name of Thacker, continues his obsession with the Golden Turd until his campaign manager confronts him over his behavior. Spying the gem, they tussle and Vincent is killed. But just as the campaign manager lifts it in victory, two secret service agents enter. He lurches at them, but they fire multiple rounds and he is killed, as the Golden Turd slips from his hand and rolls under a chair. It is found by a cleaning woman who bundles it up and takes it to the Vatican where she presents it to The Pope. He presents it before a board of religious leaders who ponder how to return it to its rightful place, as the camera pans in on a stone tablet of Roger astride an Egyptian pyramid.

The Golden Turd returns in "300" when the religious leaders plan a way to get rid of the Golden Turd by returning it to its source. However, they too fall under its spell and kill each other. The 'Knights Turdlar', protectors of the turd, observe a delivery girl is immune to its spell and charge her with delivering it to Roger, and shoves it up his anus. This results in Roger falling into 300 pieces, turning the world into a utopia. When Roger's mouth is delivered to the Smith's house and tells of the situation, they set on a worldwide mission to find all his missing pieces and put him back together. They find the last piece is at the Family Feud game, so the Smiths must play to win the butthole. Roger wins and inserts it and the Golden Turd falls out, and Steve Harvey steals it until Stan knocks him out and takes it away, claiming intent to destroy it. Twenty years later, it has been revealed the Smiths have been separated as their only goal was to keep the Golden Turd for themselves. However, their fighting results in all of their deaths, and Roger and Klaus find the Golden Turd. Roger is able to see the moment he pooped out the Turd and proceeds to tell his past self to hide it, so no one can get it. With past Roger still keeping the Turd along with Steve, sets out on a road trip to Boca Raton. In the epilogue, a boy tries desperately to win the turd in an arcade crane game, until his mother pulls him away, but not without a look of avarice as they walk.

Notes & Diversions from the Storyline

The Golden Turd makes a cameo in "Widowmaker" when the cast and crew celebrate the 1000th vagina joke.

The episode commentary for "Joint Custody" reported another chapter in the saga of The Golden Turd was supposed to take place but was dropped for time. Story lines were suggested involving the death of Mrs. Marylin Thacker in a condo pool in Boca Raton by an alligator or being killed by a liquor store delivery man to steal the turd to give to a Cuban crime boss to save his sister.

The Golden Turd is under the parking meter in the revised version of the theme song.

The Golden Turd turns up in "Rapture's Delight" when Jesus returns it to Roger who needs it to power his space ship in an effort to escape Earth during the final battle between the forces of good and evil. But first, Jesus needs Roger to fly himself and Stan to the United Nations Building in New York to fight the Anti-Christ. Jesus says he found it after a battle near Boca Raton. When they crash into the building, Roger is unable to get his spaceship restarted to fly away but turns down Jesus' request to help rebuild Earth. With Roger directing his earlier self to take the Golden Turd to Boca Raton in "300", it sets up the events that follow in this episode.

In "Season's Beatings", the base of Roger's pimp cup strongly resembles the Golden Turd.