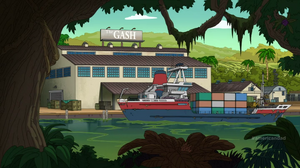 The Gash Sweatshop is where Steve is imprisoned after being caught shoplifting in "Crotchwalkers" at The Gash. There, he is beaten by Harper and is forced to wear a security tag in his ear which would warn if he tries to escape. Those that do attempt are subjected to torture by being folded in a sweater press.

As Francine was the one who taught him how to steal in an attempt to bond, and with Stan out of action, she is forced to rescue Steve herself. Shadowing the store security as they ship off other shoplifters, Francine discovers where they hold Steve.

Posing as a goverment inspector, Francine infiltrates the factory, gaining help from Matilda, whom she promises to help escape as well. To sneak Steve out, she stuffs him under her skirt, but he falls out as she uses one of Stan's grenades to blow their way out. Six months after their escape, she suddenly remembers her promise to help another prisoner, and the prisoner curses her for leaving her behind.

Retrieved from "https://americandad.fandom.com/wiki/The_Gash_Sweatshop?oldid=72015"
Community content is available under CC-BY-SA unless otherwise noted.