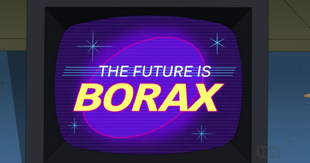 The Future is Borax
Stan and Francine go to extremes to save their marriage. 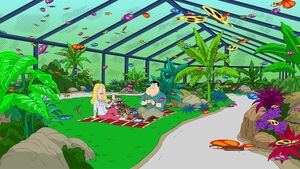 When Stan and Francine start to bicker in front of Barry over dessert, he recommends a couple's retreat. Their sniping continues, however, but when they take a balloon ride and their pilot falls overboard, they are left to their own devices. Trying to land the balloon, they discover they are over water. Combining their talents, they manage to stay aloft in search of land. But when the balloon's burner malfunctions and starts to take them into the stratosphere, Stan's last-ditch emergency action manages to bring the balloon down just outside of the Australian Outback. There, they are rescued by Travelocity insurance that Stan complained about paying for. Safe again, their bickering quickly returns and they realize that they need to face danger in order to get along, so they run deep into the deadly Outback away from their rescuers.

Parched and facing death, they stumble upon a borax mine that had been abandoned, but when they start to stock up on survival supplies, they again run of the quandary where being comfortable starts their bickering again. Learning from a video tape that the mines are very dangerous, they flee to the mines before they learn of some strange activity that takes place there. Deep in the mine, they discover bloodthirsty humanoids whose behavior could compare to their own. They realize that their big mistake was following everybody's advice, as Stan's ever-increasing volume alerts the humanoids to their presence. They become trapped in a dead-end and the only solution is for Stan to battle them.

As the scene cuts to the high school, a bloodied Stan and Francine arrive and the former slaps Barry for his advice. 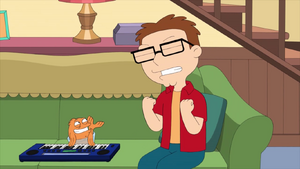 Meanwhile, when Steve, Hayley, Klaus, and Roger hear about a contest to write a Pizza Overlord jingle, Roger manages to compose the prize winner. He is soon offered a chance to write another jingle for a seafood restaurant, but having his victory go to his head, he writes an overblown production that bankrupts the restaurant chain.

Previous Episode /// The Future is Borax \\\ Next Episode

Retrieved from "https://americandad.fandom.com/wiki/The_Future_is_Borax?oldid=85378"
Community content is available under CC-BY-SA unless otherwise noted.