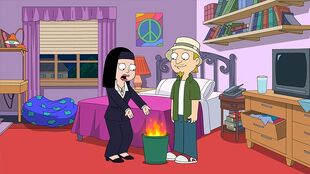 The Devil Wears a Lapel Pin
Hayley attempts to destroy the CIA calendar. 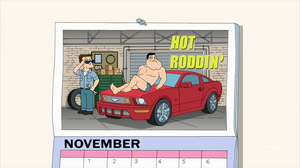 As Stan sleeps, he is abducted by the guys at the CIA where he is put in charge of the CIA cheesecake calendar. As Stan goes through a series of assistants, he introduces Tyrese Gibson, a new agent who will be the star of the calendar project although he would prefer to pursue leads on a terrorist suspect he's uncovered. But when he fires yet another assistant, Jeff considers becoming his replacement until Hayley explains about having him destroy a picture she drew as a child and decides to destroy his calendar in revenge. She takes the job as his assistant in order to get into the project. At the photo shoot, Bullock bulks up on steroids while the other agents do their poses. Tyrese wants to talk about his case, but is rushed through for his picture. 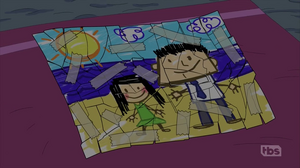 As Stan's shoot is complete, Hayley tries to take it and eventually succeeds in getting it. She instructs Jeff to burn it as soon as she brings Stan upstairs, but when Stan compliments her on the job she did, she begins to have second thoughts about trashing his project. She suddenly realizes that she left Jeff in charge of burning it and rushes back upstairs where he sets it aflame on her arrival. She feels sadness for destroying the project and decides to reshoot the pictures with Jeff's help. Sneaking up on the agents, she manages to get the required poses in their everyday life and then photoshops them into the appropriate background. At the presentation, Hayley rushes the pictures to him, but Stan belittles her when she fails to bring the right lapel pin. Jeff blows up back at him and tells him the entire story. Stan realizes what a jerk he was and goes to tell her that he's sorry, and repairs her original project as Jeff is left to host the presentation in complete confusion. 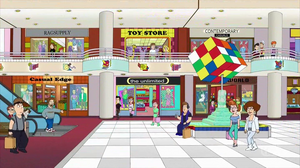 Meanwhile, Roger tells Francine about achieving his dream of attending college. As he begins his first day, he is distracted by a stand offering a Discovery Card and a jacket if spending limits are reached and immediately quits school after getting a card. At the mall, Roger goes on a shopping trip but finds that few places will take his card. But when he is thrown into a dumpster, he finds a person who will show him where he can use his card. He is led to a secret underground section of the mall that is frozen in the 80s and goes on a spree. He spends enough to get his jacket, but also discovers the bill is beyond his means. He decides to fake his own death and has a funeral with Steve and Francine in attendance. Discovery arrives to verify the body, but when they start to award a beach towel for putting the funeral on his card, he reaches for it and Steve has to grab it, throw it into the casket with him and close the lid quickly.

Previous Episode /// The Devil Wears a Lapel Pin \\\ Next Episode

Retrieved from "https://americandad.fandom.com/wiki/The_Devil_Wears_a_Lapel_Pin?oldid=78848"
Community content is available under CC-BY-SA unless otherwise noted.