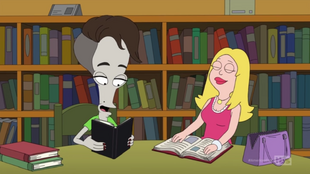 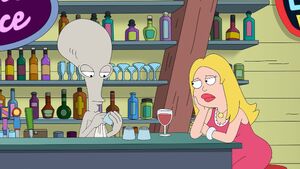 While trying to have a conversation about death, Roger's domination of the conversation gets on Francine's nerves, and she goes to lengths to avoid him until Klaus talks her into taking in a film with him. While there, she suddenly finds his whispering pleasurable. She tells Klaus about this and he explains ASMR to her, so she plans to keep him whispering to her. 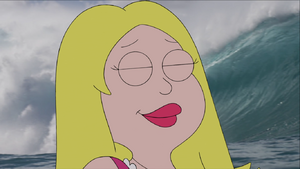 When Roger gets tired of movies, Francine takes him to the library, a golf tournament, and even a funeral. But when he finds several cassette tapes of his whispers, Klaus tells him what's going on and he reacts badly to her not being interested in his actual conversations, and leaves for Chernobyl to keep her from recording him. Going through withdrawal in addition to wanting to help him, Francine and Klaus follow, but an irradiated Roger puts them to sleep with his voice, causing them to fall ill to radiation sickness. They find the only way they can approach him is to cover their ears, and during their attempt to help him, Roger learns that Francine actually did listen to him, at least part of the time. 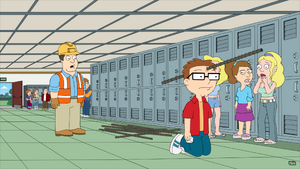 Meanwhile, Steve falls for a girl at school and writes a 'secret admirer' note to try to surprise her at a dance. But when a construction worker accidentally drops a stack of rebar, one of the pieces punctures his head, causing memory loss. Reading back his note, he believes it was sent to him. Despite feeling that something is off, his friends try to keep him believing that everything is normal as to avoid breaking his heart. As Steve waits for his secret admirer on the night of the dance, Snot finally tells him that he has a piece of steel in his head, which he admits to being aware of, having put on his tie. Barry, thinking they all needed to put steel bars to their heads for Steve, returns with a load of rebar and drops it, and when he starts sliding around on it, he begins a new dance at the school.

As Roger, Francine, and Klaus return from Chernobyl, they decide to try out the new dance craze called 'The Barry', although Klaus dismisses it as a hallucination brought on by the radiation, as his severed tail agrees.