The Census of the Lambs 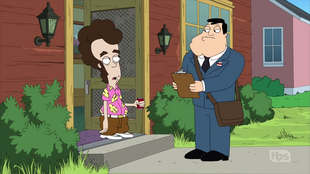 The Census of the Lambs
Stan nearly loses his skin trying to beat Hayley. 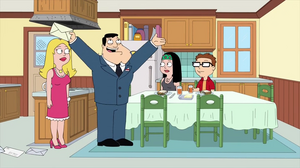 After attending a Law & Order convention, the family arrives home where Stan is excited to find the census has arrived in the mail. Stan declares his intentions of working as a door-to-door enumerator for those that fail to mail in their census and Hayley considers it as a job as well, but Stan decides it is too important to leave in the hands of anyone but himself. When he shows up for the training class, he finds that Hayley has upped her interest solely to rain on his parade. 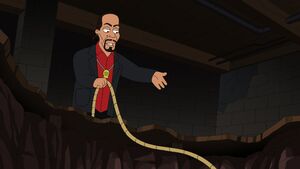 Stan starts out big, but Hayley strikes gold with Phyllis, the neighborhood busybody, and gets the info she needs for the entire area. Stan tries to catch up at a spooky mansion, but finds himself knocked cold and thrown into a pit with a pair of other men. When Hayley discovers that her dad has come up missing, she starts canvassing the neighborhood and finds that many other men are missing, with the spooky house being the center of things. When she makes an inquiry about the house to Phyllis, she too is knocked cold and tossed into the hole with Stan, where it is revealed that Phyllis makes suits out of men's skin. Just when things look grim, they are rescued by Ice-T, whom Hayley met at the convention, who used his TV show detective skills to track them down and kick Phyllis to death. 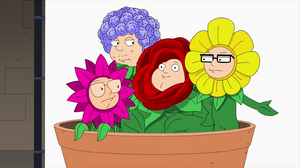 Meanwhile, Klaus' uncle leaves him a camera, so he talks Steve into modeling for him. He gathers Steve's friends to join in as well, although his style strongly resembles Anne Geddes which Steve makes note of, although Klaus insists he never heard of her. He is later seen copying his shots directly from one of her books. Klaus soon centers his focus on Barry, causing the guys to get jealous of the attention he's receiving, so Steve calls Anne who attacks Klaus and Barry for copyright infringement.

Previous Episode /// The Census of the Lambs \\\ Next Episode