The Book of Fischer 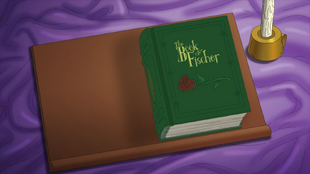 The Book of Fischer
Jeff starts journaling to help with his bad memory. 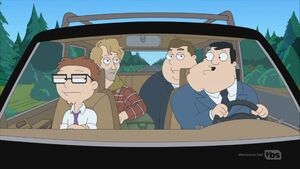 When Steve finds a gray hair, Stan decides to introduce him to his buddies at the barbershop. However, Stan's interjections in the conversations are badly misplaced and Steve points it out to him when they return home. Self-conscious on a return trip, Stan blurts out that Tuttle is in a witness protection program, which quickly becomes widespread news. He tries to cover it up with a fake funeral, but can't help but reveal it was faked when talking with his friends from the barbershop again. They set out for a CIA safe house, where Tuttle reveals that he was the witness to multiple gang murders while living in Chicago. Picking up a hitchhiker against Tuttle and Steve's better ideas, the former offers to teach Stan how to carry on a conversation. They narrowly avoid one assassination attempt, but Stan leaves Steve and Tuttle behind at the safe house to keep driving with the hitchhiker in order to learn more. When he returns to the safe house, he discovers that gang members have already arrived and prepare to kill the three of them. Stan volunteers to put his new conversation skills to work in order to provide a distraction, which, despite Steve's reservations, is heartedly endorsed by Tuttle. As he wins them over while 'chopping it up', they vanish into tiny pieces. 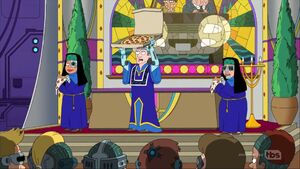 When Jeff gets on Hayley's nerves in an effort to remember things by discussing trivial matters with her, she hands him a journal and tells him to write them down. As he notes down what he sees around him, his descriptions are pretty much hit and miss for accuracy. When he decides to get a popsicle out of the freezer, he finds two and decides to take them both, but needs to place his book inside, where he promptly forgets about it. A thousand years in the future, it is found in the remains of what was once Langley Falls and eventually becomes the basis for a new religion, although its accuracy is called into question by grade schoolers.

Back in the present, the gangsters did not disappear as envisioned in The Book of Fischer, but instead prepare to shoot their hostages. However, with their attention focused on Stan, they are gunned down by Tuttle, who has been packing a gun ever since he became marked for assassination. Despite this, he decides to continue his life in Langley Falls, as Roger is revealed to still be living 2000 years in the future as a half-cyborg family man, annoyed that Jeff has become a religious figure, but happy to still be alive.

Previous Episode /// The Book of Fischer \\\ Next Episode