For a complete script, see: "The American Dad After School Special" on the Transcripts Wiki

Debbie: All this talk of death is making me cremate.

Debbie: You lost me at lasagna.
Steve: I never said lasagna.
Debbie: Well, I was thinking about it.

Debbie: You sunk my battleship! Eight hundred souls were lost.
Steve: Among them, Lieutenant Don Sharpe. He made it through the bulkhead before it was closed. At least half of him did.
Debbie: God, you're tweaked.
Steve: Take me!

Hayley: Plus-size women drive our economy with their purchases of Garfield books and Haagen-Dazs.

Stan: That's one impressive man. Handsome, fit, the whole package.
Roger: That's great, Stan. Can we stop staring at your reflection in the TV and turn it on now?

Steve: Good news, everyone. I'm in love.
Francine: Tell us about her, sweetie.
Steve: Her name is Debbie. She smells like a glue stick, she shares my interest in bug zappers, and she likes reading old books by guys who died of syphilis.
Francine: Syphilis? Ooh, la, la.

Francine (about Debbie): We can't wait to meet her, Steve.
Stan: You can say that again. It'll be nice to have a pretty girl around the house for a change. (Francine glares at him) I-I meant a pretty, younger girl. (Hayley glares at him) Don't get mad at me. It's called make-up.

Stan: I shouldn't be here, Veronica.
Veronica: Yeah, but your family will keep sending you back until they think you're getting better.
Stan: But I don't wanna eat. I hate food!
Veronica: Don't sweat it. I've got a few tricks I can teach you. [She pulls a sandwich out of her mouth] That's been in there for days. 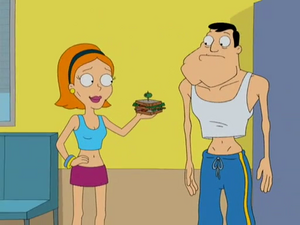 Steve: How ya doing, Dad?
Stan: Fat and healthy, son. In a few weeks, I'll be a regular Debbie. (Steve starts crying) Steve, what's wrong? What about the word "regular" set you off? Here, have a Little Debbie. (Steve continues crying) What, now it's the word "little"? You know what? Why don't I put on some Debbie Gibson and we can talk about it?

Hayley: We were just freezing our...
Francine: Tampons!!
Stan: What?
Hayley: It's a woman thing, keeps them crisp, great in the summer.
Francine: More refreshing than a popsicle!

Stan: Hayley, are you wearing makeup? You look like a whore.

Retrieved from "https://americandad.fandom.com/wiki/The_American_Dad_After_School_Special/Quotes?oldid=87504"
Community content is available under CC-BY-SA unless otherwise noted.