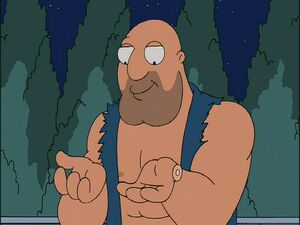 Ted Feedler is an actor and a hand model.

When Hayley unionizes the homeless so they won't fight in Stan's "bum fights" in "Threat Levels", Steve arranges for Stan to fight a giant bum described as so bad that he "killed his own name". To make the scene even more horrifying, he bites off his own thumb. As it turns out however, Hayley and Steve had rigged the fight, as the bum was actually actor Ted Feedler, paid to throw the match after having pummeled Stan a bit. When Ted looks at his hands after admitting he was really an actor, he reacts in horror to what he did to his beautiful hands by biting off his thumb.