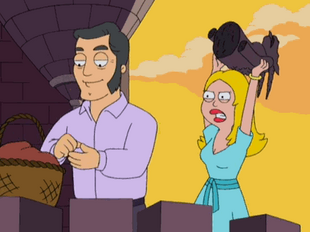 Francine is trying to kill Clooney

Tears of a Clooney
Francine wants to destroy George Clooney

Plot: On Francine's 39th birthday, she becomes angry, insults everyone and throws the cake at the wall. When Stan brings what few bits he had left, he discovers why she's so depressed while watching her only TV appearance...a bit part that was interrupted by a young George Clooney, whom she deeply loathes. Because Clooney stole her big moment, he went on to becoming a famous actor. 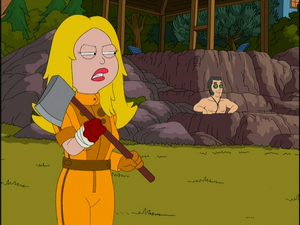 Stan attempts to fulfill Francine's dream of fame by arranging for her to be attacked by a swarm of paparazzi at the grocery store, but she informs him that her real dream is to destroy Clooney. Her plan is to woo him, win his heart, then break it, and watch him cry. Stan thinks her dream is the craziest, most unsettling thing he's ever heard, but he's happy to do it. Stan and Francine fly to Prague, where Clooney is staying for the production of his new movie, Dr. Love. When they get to their hotel, Stan reveals that he has hired mercenaries, killers, thieves and rapists to gather info on Clooney, which Francine uses to her advantage. Sergei Petkov, Europe's greatest serial killer profiler, tells Francine everything to know about Clooney; He is completely in love with himself, so she must become him; he believes in love at first sight; finally, she must resists his charm. They start out with Stan becoming friends with Clooney after sending his other friends on a freighter to China. Through the course of a year, Clooney meets Francine and falls in love with her. By the next year, Francine has total control over Clooney's heart, but Stan has become charmed by Clooney and warns him that Francine is a mother. Now becoming psychotic, Francine plans to kill him if she can't break his heart. To stop her, Stan handcuffs her to a pipe in the hotel room, but she gets free by cutting off her own hand. The two engage in a motorcycle chase to a spa where Clooney is relaxing. Francine beats Stan, who is left hanging from a cliff. Stan asks her what the real reason is behind her hatred of Clooney, and it turns out this is just her way of having a mid-life crisis. Stan talks her out of killing Clooney, and the two head back to the hotel. Stan breaks Clooney's heart himself by breaking off their friendship, while a gleeful Francine watches through video cameras hidden in Clooney's room. Finally satisfied, Stan wishes Francine a happy 40th birthday. 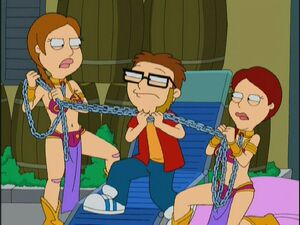 While Francine and Stan are in Prague, Roger has the pool drained and filled with soil to grow a vineyard. But because he's too weak to tend it himself, he adopts some foster children and treats them like his slaves. Steve hates having to share his house with them, so Roger has two cute girls be his "personal assistants." Steve and Roger then live a privileged life, growing mutton chops and smoking pipes while the children work in the snow. Hayley tries to get Roger to let the children go, despite being weakened from a disease; in the end, she beats the disease and calls Child Services to save the kids from Roger. Roger lets them go anyway, after he tastes the wine they made and finds it horrible.

Previous Episode /// Tears of a Clooney \\\ Next Episode

Retrieved from "https://americandad.fandom.com/wiki/Tears_of_a_Clooney?oldid=78452"
Community content is available under CC-BY-SA unless otherwise noted.