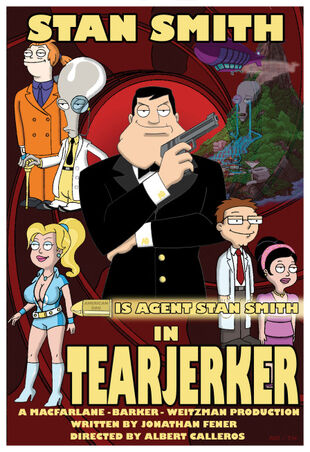 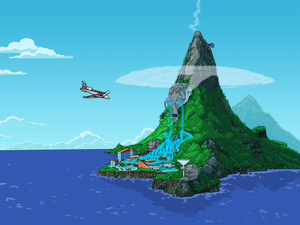 Stan and other characters play roles in a Bond-style spoof. In it, Stan plays a 007-type agent assigned by his boss, "B" (Bullock) to infiltrate the set of arms dealer-suddenly-turned movie producer Tchochkie Schmear (Klaus). While in Tunisia, Stan discovers that Schmear has been hired by the diabolical Tearjerker (Roger), a business tycoon who has been abducting celebrities from his spa and replacing them with celebrity robots that make horrible movies and malfunction when exposed to milk. After being helped by Tearjerker's henchwoman Sexpun T'Come (Francine), Stan realizes that Tearjerker plans to use his masterpiece "Oscar Gold," the best and saddest movie ever about a mentally retarded alcoholic Jewish boy and his cancer ridden puppy during the Holocaust, to cause millions of moviegoers to cry themselves to death. 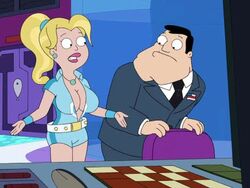 After Gums' boat tour of the plan leads Stan and Sexpun right into the villain's office, which Tearjerker is pissed about, saying that "yeah the contractor who I got to build this place really screwed me bad". He ties them up and forces them to watch "Oscar Gold" with millions of people around the world. Everyone is on the verge of crying to death, but Stan remembers that Sexpun has a ring in her pocket that was given to him by "S" (Steve), whose gadgets only make womens' breasts grow. He urges her to put it on, which causes Sexpun's breasts to swell so large that they break the ropes, allowing her to set herself and Stan free. Discovering the real celebrities in Tearjerker's dungeon, Stan records a video of them with their baby and posts it on the Internet. All the movie goers then get phone calls about the celebrity baby and go home to see them online.

Tearjerker then unleashes his soldiers to kill Stan. However, as they descend on ropes from his blimp, they plummet through the floor of Tearjerker's poorly-built office; Stan then climbs up their ropes onto the blimp. Tearjerker tries to flee in an escape pod, planning on creating a more successful movie about a baby chimp trying to revive his dead mother for hours. However, the shoddy construction causes the pod to fall into a volcano with Tearjerker cursing the contractor who he hired to build his hide out. In the end, Stan and Sexpun get married, though it is unknown how long their relationship will last since Sexpun realizes that Stan was, up until their honeymoon, a virgin. As they make love, Tearjerker's arm rises from the volcanic crater...only to fall back in after a few seconds, suggesting that he is truly dead.