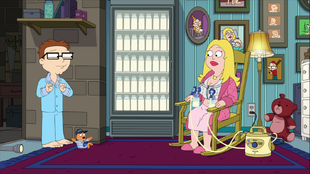 Tapped Out
Steve discovers his mom has never stopped giving him her breastmilk. 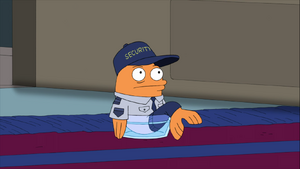 While shopping for new school clothes at Lanceton Outlets, Steve ditches Francine to shop on his own and picks out something cutting-edge. His new look gets him the starring role in the school play, Oedipus Rox. That night, while Klaus performs a security patrol around the house, he spies a secret room in the basement where he discovers that Francine has been secretly expressing breast milk to give to Steve. He promises to keep her secret but quickly rats her out. Steve is understandably upset, but when he has trouble focusing on directions from Principal Lewis for the school play the next day, he insists on continuing the breast milk to help him. 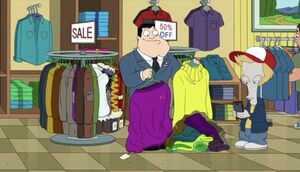 Meanwhile, Stan picks through the clothing racks for bargains and chooses a turtleneck, but Roger convinces him he needs a longer neck for it, so he begins to expand it with rings. The latter steals a phone, and after discovering that it takes videos, decides to become a documentary film director. Jeff ends up getting a chimpanzee face transplant after Linda Memari's chimp rips his face off. Steve tries to justify continuing the breast milk but insists on trying to cut it back eventually. Klaus shows Francine a security tape where she doped his orange drink so he would be sleepy and would need to come back to her, but she destroys it. On the day of the play, Steve, feeling nervous, insists on getting one more dose before the curtain rises. Without any alternative, Francine is forced to breastfeed him directly just as Principal Lewis insists on a premature curtain raising, exposing them in the act. 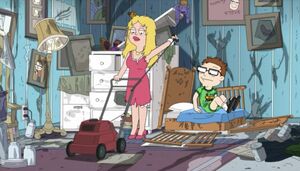 Turned into pariahs by the town, Francine and Steve are forced to live in her basement hideaway by Stan. They place their hopes on Roger's film about them to change Stan's mind. But when no word comes back, Francine sneaks upstairs and discovers that Roger abandoned the project when it became just too weird for him and changed to focusing on Stan, who used rings to extend his neck, and Jeff. Watching the test footage, Francine had to agree that things were just getting too weird, but Steve continues to insist on breastfeeding. Desperate to separate him, Francine uses his allergy to bees and allows herself to be stung repeatedly, tainting her milk. This sends Steve into a coma, and despite his initial insistence on wanting the milk when he wakes up, the doctor points out that he'd been without it for a full year.

Previous Episode /// Tapped Out \\\ Next Episode

Retrieved from "https://americandad.fandom.com/wiki/Tapped_Out?oldid=87259"
Community content is available under CC-BY-SA unless otherwise noted.