They Should Change What happend to Klause Heissler Body on how it ended up Frozen in ice .In  Da Flippity Flop

Klaus' last name is Heisler and not Heissler. As seen on The Boring Identity. 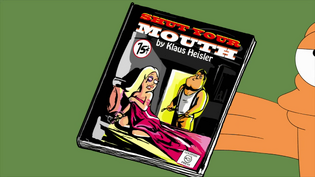 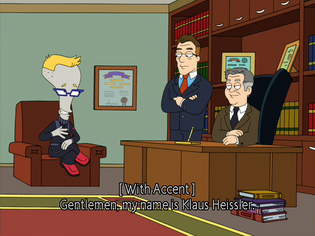 Since it is actually shown, we'll move but Heissler will also be credited as it appears in every subtitle shown in both "Live and Let Fry" and in "For Whom the Sleigh Bell Tolls". --Buckimion (talk) 23:32, July 13, 2013 (UTC)

Although it is shown that Klaus was transferred back to  a human body at some point in Of Ice and Men, he is shown to have died as a fish in Buck, Wild. Unless Riger simply carries Klaus' fish corpse around and talks to it, though his mind hasn't occupied it for some time,

Also, the very same episode implies Klaus is a,urophiliac, so perhaos that should be added to his personality profile. I am, what I is. -Ron Stoppable 21:19, November 11, 2013 (UTC)

I thought about a deaths section like Stan's, but with only two examples I can think of off the top of my head, a third would really be needed to justify it. This is just one more reason I try to emphasize to people that the characters are as actors in a skit and nothing really stays constant. Also, Klaus I believe mentioned being into similar tastes previously and I don't believe in this context that he is simply into "water sports." --Buckimion (talk) 22:31, November 11, 2013 (UTC)

I rewatched the "White Rice" episode again and counted the number of kids he had in the fish tank and I counted 10 in the fish tank, plus an additional 3 she ate successfully and the 1 that she ate halfway through. So instead of it saying "12 kids", doesn't he technically have 14 kids? Also, I heard him call one of his kids Susan and her name doesn't appear in the "Also Appearing" tab. ~Curious Poker Chip 11:38 a.m. February 2nd, 2015 (Pacific)