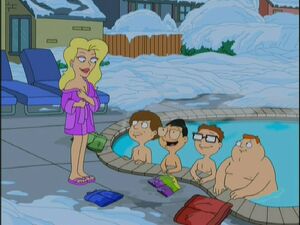 Svetlana is the Russian mail order bride Steve and his friends get when they order binoculars in "Of Ice and Men". They show her off at school and plan on skinny-dipping with her until Hayley convinces Svetlana to protect her interests and not do anything sexual with them until one of them marries her. The four boys hold a contest to decide who gets to marry her, and Snot wins; however, at the wedding, Toshi, who learned Russian to woo her, makes an impassioned plea for her, and she leaves Snot for him.

Svetlana was later indirectly referenced in "Escape from Pearl Bailey" when Toshi recalls having a wife after Steve says that he, Barry, and Snot have never had girlfriends.

Svetlana is voiced by Ivana Miličević.

Retrieved from "https://americandad.fandom.com/wiki/Svetlana?oldid=68314"
Community content is available under CC-BY-SA unless otherwise noted.