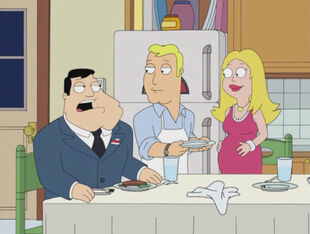 Surro-Gate
Francine becomes a surrogate for her neighbors. 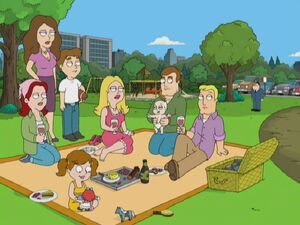 After a blissful morning start, Greg and Terry announce that they would like to have a baby through a surrogate mother. Stan is horrified at the thought of them having a child. When Francine hears they are having trouble deciding on a surrogate, she volunteers to have a baby for them. Imagining the worst, Francine hides her pregnancy from Stan. When Stan finds out when Francine's doctor calls, Stan's Republican blood boils. Chastened by Hayley about the baby's well-being, Stan decides to work with Francine. When the baby is born, Stan kidnaps her and heads to the Nebraska boarder, where gay couples have no rights. Supported by gay bashers and pursued by gay truckers, 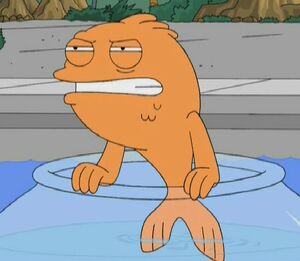 Stan finds refuge at a farm that turns out to be run by a lesbian couple and their children. Stan decides to kidnap their children as well. When the children act the same as any other children, Stan sees that he was wrong and gives the children back. As punishment for kidnapping the children, Greg and Terry put a restraining order on Stan. They allow Francine, Steve, Roger, and Hayley to play with the baby in the park. They also let Stan come, on the condition that he stay far enough away.

Meanwhile Steve and Roger pull a prank that pushes Klaus over the edge, making them fear their every move. They become a pair of Howard Hughes-like recluses. After hiding for nine months, they decide to beg Klaus' forgiveness only to find he had forgotten the incident until reminded and he vows vengeance again. Out of fright, Roger slams a stack of books on Klaus' bowl, trapping him and rendering him harmless.

Retrieved from "https://americandad.fandom.com/wiki/Surro-Gate?oldid=78953"
Community content is available under CC-BY-SA unless otherwise noted.