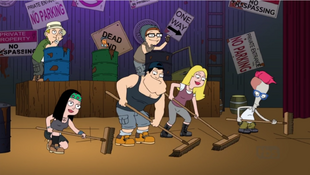 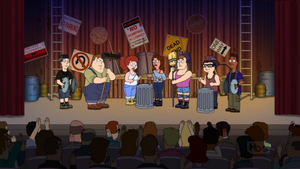 After the passing of an uncle, the family convinces Stan to spend the money on a vacation to New York. But when he leaves them to make the travel plans at Costgo, he ends up getting fast talked into buying the rights to an Off-Broadway play, Stomp. The family is irritated at first, but when anticipation for the play seems to make it a success, they admit they were wrong. But when it turns out to be a dud since no actual performance was practiced, the Smiths are forced to make a run for it. After several weeks on the road, when they are stopped by a local police officer, Stan accidentally hands him the ownership papers for Stomp and he believes they are there to put on the show. They go through the motions of selling the tickets, but run out before the showtime, having stolen the town's money. 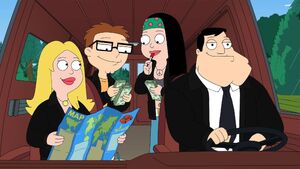 They decide to continue the scam, going from town to town, but when they encounter a town that's already been warned of their tricks, they are forced to put on the show for real. However, they've picked up enough skills by then trying to sell the show that they are actually successful, and a Broadway producer in the audience takes them to New York. As the family adapts to their new lives, Stan finds they are growing apart as a family, so he sabotages the show and they are run out of town yet again, but not before stopping to terrorize a Sonic Drive-In.