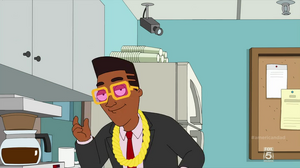 Stiles, also known as McGee, is the new intern at the CIA who leads Jackson, Dick and Sanders through the musical number "Rubbernecking" when they try to explain to Stan about how to check out girls without getting caught by Francine in "Rubberneckers". During the number, he identifies himself as "McGee."

He eats at Fro-YO-MAMA with Dick, Jackson, Stan, and Jeff Fischer in "Holy Shit, Jeff's Back!" and is present when the CIA tries to arrest surfers in "Stan Smith as Keanu Reeves as Stanny Utah in Point Breakers".

During the listing of possible surprise owners of the mineral rights under the Smith home in "Mine Struggle", his name is given as "Stiles." Stan repeats the Stiles name in "Gift Me Liberty".

Stiles joins the CIA strike in "(You Gotta) Strike For Your Right". In this appearance, he is voiced by Colman Domingo.

Stiles is sent to retrieve a doll by the CIA needs refuses to surrender in "Russian Doll". In this appearance, Stiles is voiced by Jak Knight.

Retrieved from "https://americandad.fandom.com/wiki/Stiles?oldid=93365"
Community content is available under CC-BY-SA unless otherwise noted.