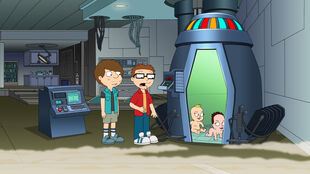 Steve and Snot's Test-Tubular Adventure
Steve attempts to use a CIA cloning machine to create a super-hot prom date. 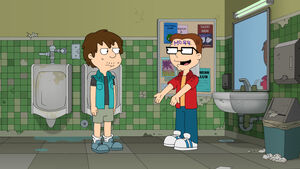 When Steve and Snot are tormented at school for being virgins, they vow to find a way to lose their virginity. They decide to try to set a target of prom date. Seeking advice from Hayley, she derides them for objectifying women. They hear Stan's pet project of babysitting the CIA dodo, Daren. After striking out with every girl in school, they find that even their other friends have dates. As they struggle for a solution, Daren's flopping around gives Steve the idea to clone their dates. Sneaking around a girls dressing room, the boys gather DNA samples in the way of pubic hair and spit as they are thrown out.

At CIA headquarters, the process has the unexpected result of cloned infants. Back home, they try to figure out what to do with the new infants and stumble into Roger's latest persona running a daycare. Following school, they try to get detention to stay late without luck. When they get home, they find their infants have reached the equivalent of 5 years old. Roger transfers them to another persona that runs a finishing school. As the boys wait for their future dates to mature to the right physical age, Snot develops some resistance. As the girls present themselves for the date, the boys have trouble getting over their parental feelings and elect to pass on sex. However, after Steve heads off to the kitchen, he returns to find Snot taking off to have sex with Steve's intended date whom he has no personal feelings for. 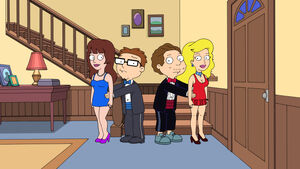 Steve takes off to stop Snot at the prom but finds out he has already headed back. Questioning Honey, Stan figures out what the boys have done and tells him that he has to kill the girls and proceeds to do just that with Honey. Steve stops Snot and tells them that Glitter means something as a person as Stan catches up with them. Steve takes off with Glitter with Stan in pursuit. As they find a moments respite, Glitter collapses, having reached the chronological age of her DNA. After saying her goodbyes to Steve, she dies. Although Stan tries to shrug off the death, Daren also dies, leaving him distraught. Trying to bring the pair back, Stan creates a dodo-Glitter hybrid and is forced to kill it as well.