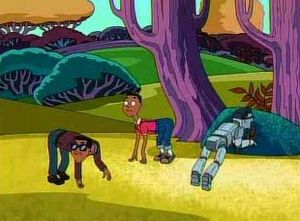 Steven Quincy Urkel, generally known as Steve Urkel or just simply Urkel, is a fictional character on the ABC/CBS comedy sitcom Family Matters, portrayed by Jaleel White. Originally slated to have been a one-time guest on the show, he soon became its most popular character.

Steve was the epitome of a geek/nerd, with large, thick eyeglasses, "high-water" or "flooding" pants held up by suspenders, multi-colored cardigan sweaters, and a high-pitched voice.

Scott Grimes reported that the inspiration for Steve's voice is a mixture of SpongeBob SquarePants and Steve Urkel. [1]

Hayley's date Mamood wears a Steve Urkel shirt in their date to Burger King in "Stan of Arabia: Part 1".

Stan finds a field of Urkels in various forms, grazing in Roger's subconscious in "Brains, Brains and Automobiles".

Hayley reveals that her first sex dream was about Urkel in "The Long Bomb".

Retrieved from "https://americandad.fandom.com/wiki/Steve_Urkel?oldid=85474"
Community content is available under CC-BY-SA unless otherwise noted.