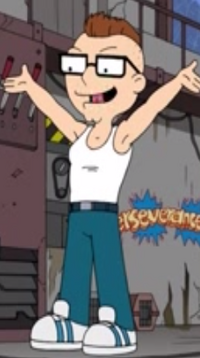 Steve-arino is a clone of Steve, appearing in "Son of Stan".

He was an experiment to see what would happen if Steve was raised purely by Stan's parenting methods. While initially he was identical to Steve in every single way and becoming a model son in Stan's eyes, including being greatly athletic and intelligent, Stan's overly strict parenting caused Steve-arino to become resentful of Stan and his lack of freedom. These repressed feelings later turn Steve-arino into a psychopath that committed various acts of animal cruelty and had kidnapped Steve with the intention to kill him, along with all the city's cats being held at a magazine factory. When Stan admits he was too hard on Steve-arino and agrees to let him do what he wants, Steve-arino wants to kill Steve. forcing Stan to fight him. During the fight, Francine frees the captive cats who attack Steve-arino, forcing him out a window.

Thinking he is dead, the family begins to leave and is suddenly attacked by the clone. Steve-arino chases Steve around a propane tank which is shot by Stan and the resulting explosion sends Steve-arino flying into a brick wall. The barely alive clone sees a gun and also sees a cat resembling Simon that had previously encountered Steve. The two, determined to kill each other try to beat each other to the gun. The cat eventually grabs it first and a shot is heard, presumably killing Steve-arino. The clone's final words are that he'll see him in hell.

Retrieved from "https://americandad.fandom.com/wiki/Steve-arino?oldid=69850"
Community content is available under CC-BY-SA unless otherwise noted.