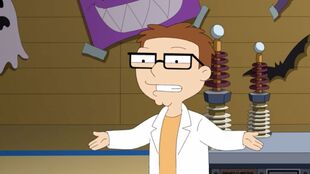 Steve's Franken Out
Steve tries to save the science club. 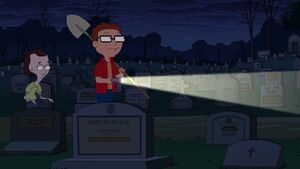 When Snot bails out of the science club when the group's turtle is killed in favor of the croquet club, Steve worries that it could lead to a breakup of his friendship with him. Billy offers to recover Dr. Kalgary's method for reanimating the dead just in time for the Halloween pep-rally, where they successfully demonstrate bringing the turtle back to life. However, Principal Lewis declares it an abomination and vows to destroy it himself, but Steve, worried that it can still break up his friendship, accidentally pushes him down the stairs to the basement of the school. After tying him up, he still refuses to rescind his order to end the science club, so they decide to build a replica of him to replace him. 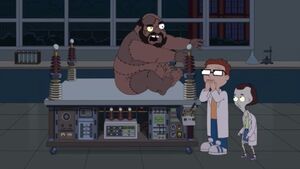 The replacement is a success, but Principal Lewis points out that he has a lunch with the superintendent the following day, and there's no way the monster can replace him for that. However, the monster is somewhat pacified while watching Gilmore Girls and agrees to the ruse in exchange for lunch at one of the show's locations. But when Steve decides to stiff him on the promised lunch, he kidnaps Snot. With Billy taken by Dr. Kalgary for stealing the diagrams, Steve is forced to turn to Principal Lewis to help him find out where Frankenlewis has taken him. Based on a location description in the pilot episode of Gilmore Girls, they figure that he's building his own version of the town in that spot. When they catch up to Frankenlewis, he gets upset that Steve won't be his Lorelei, but Principal Lewis agrees to be exactly that, which pacifies the monster.

Meanwhile, the Smith family finds out that tainted water may put Halloween in danger, but when the town gets the brush off from Roger's CEO persona, they drink it anyways, and Roger decides it's time to break out a new costume.