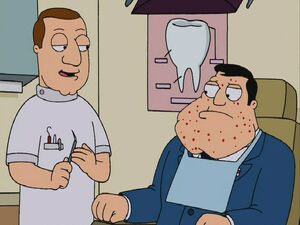 Stephen Tyrone Colbert (Born May 13, 1964) is an American political satirist, writer, comedian, actor and television host. He was the host of Comedy Central's The Colbert Report, a satirical news show, before becoming the host of the Late Show on CBS

He provides the voice of dentist Dr. R. Dandliker in "All About Steve".

Retrieved from "https://americandad.fandom.com/wiki/Stephen_Colbert?oldid=62579"
Community content is available under CC-BY-SA unless otherwise noted.