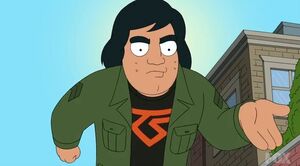 Stelio Kontos is a Greek bully that made Stan Smith's life miserable.

When Stan tries to toughen up Steve in "Bully for Steve", he recounts his beatings at the hands of Stelio which stopped when Stelio moved away. When Steve gets tired of being pushed around by Stan, Steve locates Stelio at a Klinko's copy store through Facebook and hires him to beat up Stan until he surrenders and agrees to quit picking on Steve. Stelio also appears to be very strong, due to him being able to overpower Stan, who is quite physically fit and well trained in unarmed combat.

To keep Luis Ramirez from beating up Steve in "The Full Cognitive Redaction of Avery Bullock by the Coward Stan Smith", Roger hires Stelio to beat Steve up first, using the logic that Luis would refuse to beat up Stelio's "sloppy seconds." This plan worked to an extent and Steve then offered to point out who beat him up, so Luis could get revenge. As he confronts Stelio at Klinko's, he fawns all over him as a legend and talks Stelio into joining together to beat up Steve, following a re-recording of Stelio's theme song for both of them.

Stelio is one of several characters having an affair with Mrs. Lonstein in "Criss-Cross Applesauce: The Ballad Of Billy Jesusworth".

A stoned Stan hallucinates Stelio during a bad trip in "Jeff and the Dank Ass Weed Factory".

Retrieved from "https://americandad.fandom.com/wiki/Stelio_Kontos?oldid=92602"
Community content is available under CC-BY-SA unless otherwise noted.