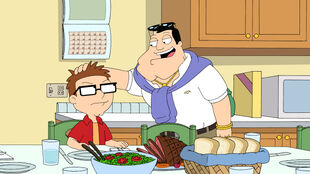 Stanny Tendergrass
Stan is denied membership to a golf club. 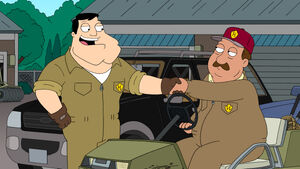 When the CIA takes their annual summer vacation as terrorism slacks off, Stan returns to his summer job at the Havercamp Country Club where he has worked for thirty years to save for a membership. In order to teach Steve the value of earning money, he gets him a job at the country club as well but Roger's persona of Mr. Vanderhill takes him under his wing and gives him a cushy job.

When Stan is finally able to save what he believe is enough to join, he finds out that the membership has increased in the thirty years since he started from $7000 to $200,000. Desperate to at least teach Steve a lesson, Stan challenges Mr. Vanderhill to a golf game with the stakes being Steve returning to work against the employee's swim time. After several wagers are made, a close match results in Stan's loss. Steve later discovers Roger paying off Stan as part of a plot to hustle the club members in exchange for a split of the wagers and enough money to join the club. 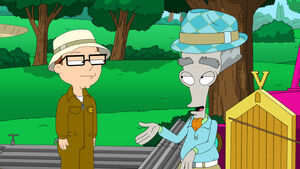 Meanwhile, Francine decides to create a legacy by creating a catch phrase. After several misses, she finally comes up with one that passes Klaus' approval. When she springs it on the family, it is met with indifference. After some coaching by Klaus and Gabourey Sidibe on the delivery, Jeff Fischer gives it a thumbs up and she takes it as a success.

Steve is aghast at Stan's change of attitude, not caring that he shafted over his fellow employees to join the club. Steve get's Stan's hero Hulk Hogan and shows him that achieving his wants though the easy way has turned him weak. As Stan remembers his roots, his strength returns and when the members refuse to return the employee swim time, Stan and Hulk Hogan proceeds to beat up the rich snobs until swim time is returned. When Horatio uses Francine's catch phrase, Stan discovers it was an old Salsa Fresco slogan.