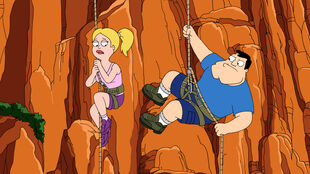 Stanny-Boy and Frantastic
Stan and Francine have trouble keeping up with a younger couple's lifestyle.

Roger's Disguise: Park Ranger from "Every Which Way But Lose" 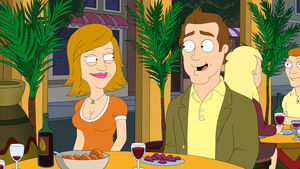 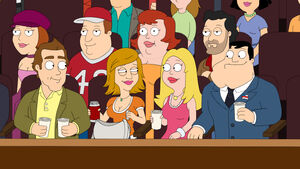 Meanwhile, Roger and Steve see an advertisement on television for a cotton-candy shooter and order one with a credit card stolen from Greg Corbin. Klaus is excited to be in on the action but is rudely dismissed by Roger and Steve. When the shooter turns out to be a dud, Klaus convinces them to stand up to the company and demand a refund. Despite finding out the hold wait time is two weeks, Klaus pushes them into waiting it out. When they finally get through, they are directed to Beverly Billingsley instead of billing. After waiting again, they finally get a live operator who simply tells them to return the shooter for a refund. Steve and Roger are overjoyed until they realize the refund will go straight back on to Greg's credit card and their labor nets them no personal gain. Klaus reveals that he egged them on in retaliation for insulting him.