For a complete script, see: "Stannie Get Your Gun" on the Transcripts Wiki

Francine: Enough! Now tomorrow you two are gonna spend the day together and reconnect or I am gonna lose it! [breaks wine bottle on table] So help me God I will cut your pretty faces! 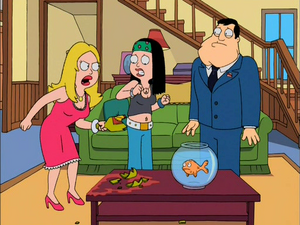 [Steve knocks a bookshelf on Stan]
Stan: Something on your mind, champ?
Hayley: Steve, what are you doing?
Steve: Something we've both wanted to do for years, "sis." [tongue kisses her, as she tries to pull away]
Roger: Oh, my God! Everything that happens from this point on is just gravy!

Hayley: [hears laughter] What the hell! That's the burglar! Dad staged the whole thing!
Francine: Yeah, I get it, Hayley. I'm unrape-able, not stupid.

Stan: Before we adjourn, let's recite the NGA Oath. Hold hands. Come on, it's not gay, there's guns in the room.

Hayley: NGA Land? A gun park?!
Stan: Yeah, Sugar Mountain closed down years ago. This is basically the same thing, except instead of riding a choo-choo through Fairy Book Land, you'll ride a bullet through a mugger's chest.

Klaus: [after Francine smashes a wine bottle] Ugh, that's the worst thing to happen to wine since the movie Sideways. That's right, America. Come get me!

Terry: Our top story, a car was broken into Cherry Street this afternoon. My car. The suspect was 6"2 and a bastard!

Hayley: I'm such a hypocrite!
Francine: Honey, he was robbing us. And he was gonna force himself on me.
Hayley: He said that?
Francine: Well, no, but I assume. [Hayley glares] What? You think I'm not attractive enough? That...That what? That he's just skip me and go straight to you? Well, aren't we conceited?

Hayley: But you were paralyzed by a gun.
Stan: No, I was paralyzed by you. Look, I'm not going to point fingers here, because I can't. Because of you.

Francine: The point is, there was a time when you two weren't always fighting.
Hayley: That was before I knew dad was a gun-toting maniac.
Stan: Beatnik!
Hayley: Warmonger!
Stan: Chupacabra!
Hayley: I'm the Mexican bigfoot?
Stan: You heard her. She admitted it!

Roger: I'm gonna make you cry and dip my cookie in your tears.

Retrieved from "https://americandad.fandom.com/wiki/Stannie_Get_Your_Gun/Quotes?oldid=87770"
Community content is available under CC-BY-SA unless otherwise noted.