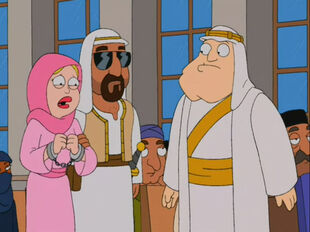 Stan of Arabia: Part 2
The entire Smith family is arrested and sentenced to death by stoning.

Plot: Last time, we were in Saudi Arabia. This time, we still are. Stan meditates a dispute between Francine and his new wife. Francine demands that Stan put them on a plane back to the States, but he reminds her that in Saudi Arabia, what the man says goes. Meanwhile, Hayley is cornered by the vice police, but a strange man intervenes and says he’s escorting her to save her.

And out in the desert, Steve comes to after crashing his Mercedes into an oil derrick. Roger is delivered to his new husband, who is very wealthy. Seeing alcohol flowing freely, Roger no longer minds his servitude. Hayley is still hitting off with Kazi, who lets it slip that he’s in Al Qaeda. She begs him not to blow up the American embassy, then passionately kisses him. 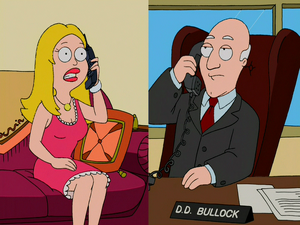 Back in Langley, Bullock gets a call from Francine asking him to give Stan his job back. Bullock informs her that he already made the offer, but Stan turned him down. Steve is wandering through the desert. He prays to God for help and God in the form of Angelina Jolie descends from the heavens. Roger is enjoying his plush life as a concubine when his new husband comes in, ready to consummate the relationship.

Elsewhere, Hayley and Kazi have already consummated theirs. In the bazaar, Francine confronts Stan about Bullock’s offer. Stan says his word rules, so Francine breaks into a song about how awful Saudi Arabia is, stripping down into her underwear during the number. When she finishes, the moral police arrest her.

Stan visits Francine in jail, and when he learns that her cellmate has been in jail for 23 years for stealing a candy bar, agrees to go to the embassy to get help for Francine. Meanwhile, Roger is trying to avoid relations by telling his husband about the glorious epic that is Beverly Hills, 90210.

Out in the desert, God tells Steve to stop worrying about becoming a man and advises him to enjoy his childhood as long as possible. Hayley wakes up and finds a note from Kazi waiting for her. He’s going through with his plan to attack the U.S. embassy. The same embassy that Stan just walked into. Hayley sprints over.

When she gets there, Hayley finds Kazi…working at a Shwarma King stand. Other girls laugh at her, saying Kazi tricks all American girls into thinking he’s a terrorist. Inside, the consulate tells Stan he can get an American out of jail with no problem. He just needs to see Stan’s passport. Problem is, he burned it.

Steve returns from the desert and tells the townspeople he has spoken with God, and God gave him a perfect plan to create peace in the Middle East. The townspeople hail Steve as a visionary, until he mentions that God is a woman. They can’t wrap their heads around this and decide to kill Steve. 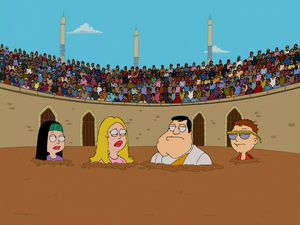 At her trial, Francine is sentenced to death by stoning. Stan declares that he won’t let Francine die alone, he’s going to be stoned with her, he does this by pretending to be a homosexual. At the stoning, Steve is put next to family for calling God a woman. And Hayley’s there too for beating Kazi into a coma. But before the audience can start chucking rocks, President Bush choppers in an declares that democracy has arrived. He throws an American flag through the judge and pulls the Smiths out of the ground. Except…that was all just a dream Stan had.

The throwers pick up their stones. But the judge gets a call ordering the Smiths released. It turns out, Roger had his husband make the call. The Smiths arrive back on American soil and Stan kisses the ground.

Retrieved from "https://americandad.fandom.com/wiki/Stan_of_Arabia:_Part_2?oldid=85834"
Community content is available under CC-BY-SA unless otherwise noted.