For a complete script, see: "Stan of Arabia: Part 1" on the Transcripts Wiki

Roger: Oh, Ernest and Julio Gallo, you make a glorious wine, and a handsome couple!

Steve: Come on, Hayley. You're going to the movies with Jeff, anyway. Just give me a ride.
Hayley: You know the rule.
Steve: You're the most environmentally-conscious, self-actualized feminist in the world...
Hayley: And?
Steve: And I'm a douchebag.

Hayley: Steve, come on! I'm supposed to meet the neighbor's son in 20 minutes!
Steve: You know the rule. Say it, and I'll escort you to the bazaar.
Hayley: [sighs] "You're the manliest man in the history of manly men."
Steve: And?
Hayley: "And when you're in your late 30's, you may have a chance at convincing a long-time female friend to have awkward pity-sex with you once."
Steve: Oh, yeah!

Stan: Damn it. If Francine had been here, she could have started the wave of laughter. Laughter is infectious, like smallpox or gay. She wants to be equal partners, well, I say, no way. 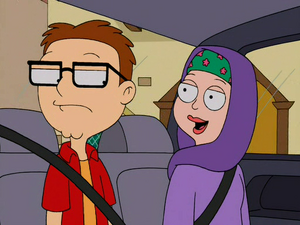 Steve: How come all the women are dressed like ninjas?
Hayley: They're wearing abayas. Saudi women aren't objectified like women in Western cultures. The beauty myth doesn't exist here.
Stan: It doesn't exist in Idaho, either. Why couldn't we go there? Talk about a bunch of dogs.

Steve: My childhood died on July 18, 2003, the day Kobe Bean Bryant was charged with sexual assault.
Francine: Steve...
Steve: Why was he even in Colorado in the first place? Black man don't go to Colorado.

Stan: Now, I've installed extra locks on the doors and windows so you won't get beheaded while I'm out.
Francine: Stan?
Stan: Way ahead of you. I'll find us a satellite so we can watch Lost when I get home. Just because we're stuck in this wasteland doesn't mean it's not Wednesday.

Roger: Does this furniture polish have alcohol in it? [drinks it] Mmmmmm... tastes like I might die.

Stan: Roger, have you seen Francine?
Roger: [drunk] Not since she came back from the store with this. Look at its magnificent size. I'm completely off my ass, and I'm barely down to the label.

Bullock: I like big Asian butts and I cannot lie.

Retrieved from "https://americandad.fandom.com/wiki/Stan_of_Arabia:_Part_1/Quotes?oldid=87487"
Community content is available under CC-BY-SA unless otherwise noted.