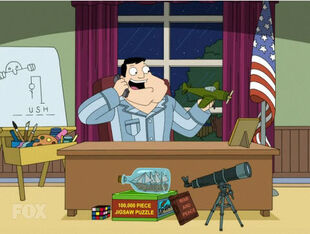 Stan Time
Stan takes a pill that allows him to stay awake all night. 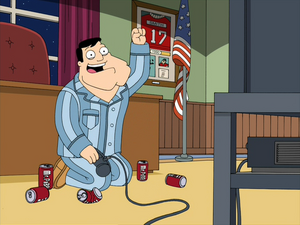 Stan finds himself lacking free time after work. Eventually, Dick tells him about pills developed by the CIA laboratory that make him feel as though he just had an eight hour sleep. Stan begins taking the pills himself, and with his new-found energy at night, Stan finishes The Hunt for Red October, learns to play guitar, and becomes obsessed with a video game called Beetman. However, he inadvertently reveals the pills to Francine, who wants in, promising to leave him to his own time.

Francine tries to mix "Francine Time" with "Stan Time", but Stan refuses. Realizing she has no interests, Francine then realizes her interest in fish and begins studying marine biology. Her interest and research spawn a published article in a scientific journal of note and soon earn her international recognition regarding her theories on the habitat of the colossal squid. Her article is given so much praise that she is invited on an expedition to locate the squid.

Stan manages to win first prize at a Beetman competition, but after noticing the couples around him, he realizes how much he needs Francine. He walks in a scuba suit all the way to Antarctica, where Francine had found the colossal squid, only for Stan to shoot it in a panic. He expresses his need for her and Francine denies to her crew that she found the colossal squid. 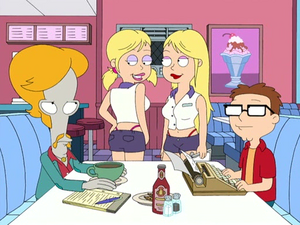 Retrieved from "https://americandad.fandom.com/wiki/Stan_Time?oldid=79194"
Community content is available under CC-BY-SA unless otherwise noted.