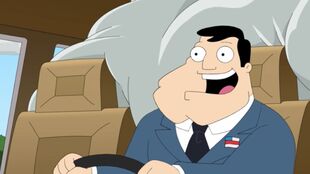 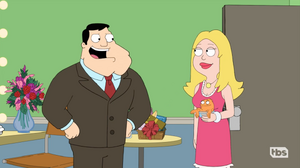 Stan gets upset when he discovers that an old college friend had gone on to a successful comedy career that Stan chickened out on, so he decides to restart his career by moving to Chicago, but finds that Klaus has tagged along. Taking an improv class to hone his skills, he quickly bombs and is told to give up comedy. But when he starts amusing friends of Klaus, the latter calls for Francine to come get him. When she arrives, she seems to encourage him to try out his comedy by booking him a gig at Pizzeria Uno, but it is actually part of a plot to get him to fall on his face and return home to her. The first part succeeds, but Deputy Director Bullock calls and needs him to go undercover on Sketches and Laughing, also known as S and L, following threats to their star comedian, Colin Jokes.

As Francine worries that Stan may go in unprepared, and indeed, freezes up when he falls flat, they spy Colin with a detonator in his hand on the monitor. Worried that the show is also dying thanks to Stan's freezing, the engineer plays some recorded laughter, which allows Stan to recover enough to see the detonator himself and allow his CIA agent instincts to kick in, unmasking the 'Colin' on stage as an imposter and the real Colin is found unharmed, tied up in his dressing room, as the Chinese were only really interested in taking out musical guest Pitbull. Realizing how much he missed his CIA work, he decides to go back to it. 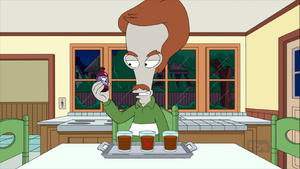 Meanwhile, with Stan and Francine gone, Roger tries to turn the house into his party zone but is stopped by Steve and Hayley, who talk him into giving a peaceful weekend a try. However, he slips them poison to enjoy the weekend his way, but realizes after they're out cold that they may need help. He takes them to the hospital where they recover, but when he tries to slip out the window to escape the police in the hallway, he crashes to the ground, unaware that the rope tied around him was not only too long, but not tied to anything.