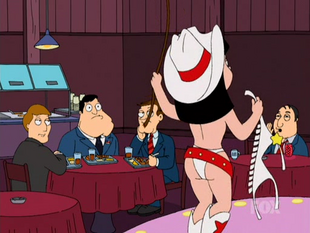 Stan Knows Best
Hayley takes a job as a stripper after moving into her boyfriend's van and being financially cut off by Stan.

Plot: Hayley dyes her hair green at a Green Party rally so Stan shaves her head while she is asleep. When she wakes up in the morning, a comment from Steve that she looks "as ugly as Roger" triggers some insecurities in the alien about his appearance. 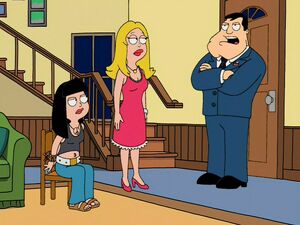 Later that same day, Stan and Francine also find out that Hayley has a boyfriend named Jeff whom they promptly invite over for dinner. Stan acts like he liked the boy but, when Hayley goes out with him again, Stan has his CIA friends abduct her and bring her back home. Before that could be done, however, Jeff had invited Hayley to move in with him. Furious at Stan for kidnapping her and unwilling to live by his rules when she is already 18, Hayley moves out of the house which prompts Roger to try and take over her room and leave the freezing attic where he's been living. Stan and Francine veto her decision. Hayley is stunned to find out, however, that Jeff lives in a van. Stan tries to get her to come back by renting a petting zoo and clown which doesn't work so he takes away her credit card. He also tries to put pressure on her by erasing the records of her tuition having been paid. Strapped for cash, Hayley goes to work in a strip joint as a waitress but is soon convinced to strip.

Out to celebrate a colleague's first assassination, Stan and his friends go to Hayley's club where he is appalled to see her dancing topless on stage. He then roughs up her boyfriend thinking that he had put her up to it but finds out that she had been lying to him saying that she went out to "torch SUVs". Jeff and Stan then go to the joint to take Hayley out. When Hayley resists, Stan is forced to beat all her colleague strippers into submission with a little help from Jeff only to find out that all the women there had started stripping because their fathers never supported their choices in life. When Francine intervenes, she and Stan decide to get Hayley out by "supporting her": They start attending her performances and howl at her as if they were customers. The strategy fails as Hayley is more than happy with the money she's making but she is forced to quit when, during an act, her wig falls off revealing her completely bald head which grosses out all the men present. She goes back home with Stan's promise to respect her privacy but he secretly has his CIA friends tail her on her dates.

Meanwhile, Steve and his friends ponder what they'll do at the upcoming school dance. The boys believe that they will never get dates at least until they are in their mid-30s and rich. Steve, despite evidence on the contrary, refuses to believe it and wagers that he will not only take a girl to the dance but also he will bring his friends her bra to prove it. After being rejected time and again, Steve finds out that the "sympathy routine" could get him a date. He makes a deal with Roger for him to pretend that he's Steve's sister who has had 98% of her body burnt in a fire and is "horribly disfigured". He then gets a girl, Kim, to come to his house to study and introduces Roger to her as "Hayley". It works as Steve pretends to be the caretaker of his "sister" and convinces Kim to go to the dance with him. 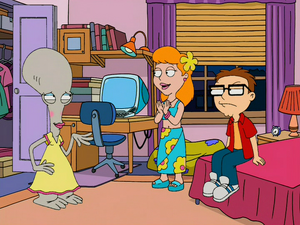 On the night of the dance, however, Kim shows up saying that she can't stay up too late and thus would prefer to make out before the dance. She asks to see "Hayley" beforehand though and her makeup tips turn out irresistible to an insecure Roger who doesn't want to be called ugly. The alien goes crazy, forgets all about his deal with Steve and won't let Kim go to make out with Steve. When Steve tries to push Roger to remember the deal or forget the room he wants, they get into a fight and Roger accuses Steve of thinking that he is ugly and of wanting to lock him away in the attic. Kim storms out vowing never to speak to Steve again but, just when he thinks that he has lost his bet with his friends, Roger presents him with a bra that Kim had lent him.