Stan Goes On the Pill 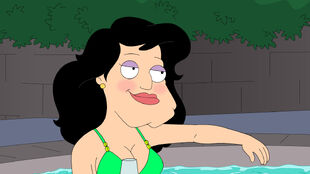 Stan Goes On the Pill
Stan takes a CIA pill and turns into a girl.

Roger's Disguise: Greater Chimdale County Man from "The Unbrave One" 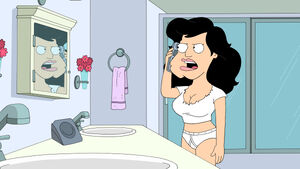 When Stan is ready for sex, he has trouble paying attention to Francine while she's talking and she cuts him off by sending him to the hospital when he refuses to answer her quiz about what she talked about and fakes appendix pains. He mentions his problems to Deputy Director Bullock who gives him a pill the CIA developed in order for their male agents to listen to female agents. After taking the pill that night, Stan is able to listen and pay attention to Francine's story, but as he stops to use the bathroom, Bullock calls to warn him not to take the pill. The message comes too late as Stan finds himself transformed into a woman. 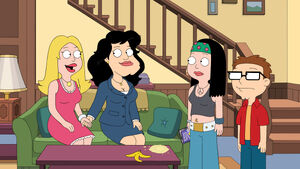 When he confronts Francine with his new look, she finds out about the pill which came with a warning to only take half a dose. The family is let in on the news although Hayley is more curious about their sex life. With no other choice, they decide to experiment with lesbianism which doesn't work out. At CIA headquarters, Smith goes to see Bullock about a reversal although he is more interested in maintaining the secret of the cure so he can enjoy Stan's new figure. At a bar with Francine and Hayley, Stan finds he is attracting men and is given advice from his family. Bullock takes him home on the pretense of helping him cure his problem but reveals to the bar help that he really intends to sleep with Stan.

Francine goes to the bar looking for Stan and discovers Bullock has taken him. On the way to Bullock's house, Stan remains unaware of Bullock's advances. Francine finds out that Bullock has withheld the cure and is told where she can find the pair. As Stan pitches his idea for the break room fridge, Francine rushes to break up the couple. Bullock reveals his attraction to Stan's new figure and manages to convince him that being a woman in a sexual way might be worth exploring. Arriving at the house, Francine follows the trail of clothes where Bullock refuses to listen to Stan's pitch and he suddenly realizes what Francine has gone through. She is overjoyed to find that Stan understands her now and keeps one of Bullock's swords as a reward to herself. She gets Stan returned to normal and they resume their normal lives, with neither one able to remember the name of the female CIA agent that helped them.

Meanwhile, Klaus is tired from working at Hardee's but Roger talks him into investing his savings into one of his schemes. After buying a rundown building, they then have to decide what to sell. Roger returns from the family meeting with the idea of selling Stan's old suits since he has become a woman. They create an advertisement but fail to attract customers. But when they start to lock up, their place is mistaken for the site of an underground dance party charging $50 a head. But when someone dies from a drug overdose in their party, they deny any knowledge of the events by passing themselves off as janitors when the police arrive to arrest the party hosts.

Previous Episode /// Stan Goes On the Pill \\\ Next Episode