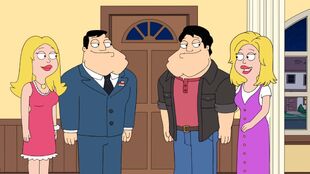 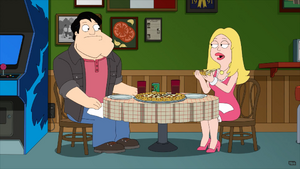 Jeff and Hayley host Francine and Stan for dinner, which causes a disagreement over their original meeting. To settle the matter, Stan uses the CIA's time machine after retrieving it from his butt, and pop in on their past selves, with a warning not to interfere with the past. But when their old roommate Radika trips over future Stan, the two groups become aware of each other. The trip doesn't completely settle who was right, and as a result, Francine takes off with young Stan for pizza, where he apologizes for his future actions, while Stan is left with past Francine, who flirts openly until they are caught kissing by a returning Francine and Stan. 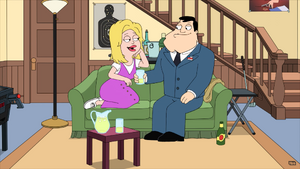 Prime Francine leaves prime Stan in the past and takes off with past Stan, while past Francine ditches prime Stan as well. But after introducing 'new' Stan around, the doorbell rings and it's old Stan, now even older. It turns out he married Radika briefly, but when they broke up, he became a ski bum, where he bumped into Roger and told him of their future. They hang out for a couple of years, but Stan still misses Francine and simply waits for the day they set out for the past. However, hearing a noise at the door, past Stan shoots without thinking and kills his future self. To set things right, Stan and Francine use the time machine again to stop the original journey, and then destroy the machine once things are set right.

Meanwhile, no one shows up for Klaus' and Steve's dinner party, so Steve seeks Roger's help. However, since Roger doesn't have to appear in a persona, he's no longer sure of who he really is, but Steve talks him through it. With Roger as a guest, Klaus considers the party a success, just as all of his other guests arrive and make the dinner party even bigger. When Klaus tries to introduce everyone to Roger, he quickly adopts yet another persona, but has forgotten who he is again.