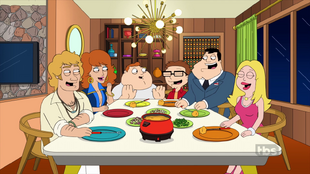 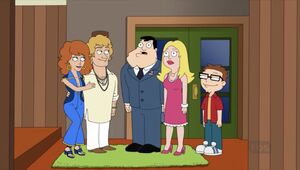 When Steve asks to spend the weekend out with Barry and his folks, Stan and Francine turn him down based on all the stories they've heard over the years. When he sasses back, they ground him, which causes him to launch into a monstrous temper tantrum known throughout the neighborhood as going bananas. Steve plots with Barry to introduce the parents so hopefully they would see how easy-going they are and the two could spend more time together. Stan and Francine reluctantly attend a dinner, where they are completely wowed by Ted and Connie and their 1970s style. But when Steve excuses himself to use the restroom, he accidentally stumbles into a bedroom where he finds that not only are Connie and Ted into swinging, but intend to swing with Stan and Francine. 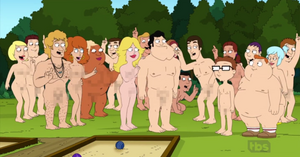 Steve finds that Barry is used to this sort of behavior and they are quickly shuttled off to his treehouse so that the adults may be alone. Steve manages to escape and breaks his arm in the process, which allows him to interrupt the night. Talking with Hayley the following day, she predicts that the end result will be divorce. Steve tries to demand that his parents never see Ted and Connie again, but finds they've already adopted their sense of style. He throws his weight around by threatening their internet passwords and sends them to their room, but later finds they've escaped and gone to a nudist resort. Enlisting Barry to help sneak into the resort, they catch up with the foursome. But when he drops the news that Ted and Connie are swingers, Stan and Francine are already aware of this, having been informed on the first night and already established that they would not participate.

Later that night, Steve asks Barry where everyone is so he can apologize, but finds that not only has Barry reverted to his evil state, but that everyone swings at the resort, whether they intend to or not. After Barry provides a little exposition to explain that the haste of the trip caused him to miss his medication and revert to his evil self, he further explains that because Stan and Francine refused to let them hang out, he is determined to break up their marriage. Having enticed everyone to the steam room, he has placed a powerful aphrodisiac in the steam, so they will have sex whether they intended to or not. Betrayed, Steve 'goes bananas' and, evading several gunshots from Barry before taking him out of action, rushes to the steam room where he finds everyone in post-sex bliss. Stan admits that they all had sex, but only with their own partners and sticking to their principles. Grossed out, Steve decides to wait in the car. 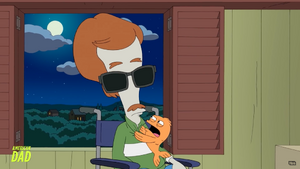 Meanwhile, Roger, having apparently stolen a pair of glasses off of a hobo, finds that they hurt his eyes. During Tuttle's eclipse party, he refuses to wear safety glasses and tries to use the transition lenses in the glasses, which results in his going blind. When Klaus and Jeff discover him in a funk, they vow to help bring him out of it. They take him to the movies where his talking throughout the film annoys the other theatregoers. When he tries to leave, his cane swinging strikes a patron who is determined to fight him, but slips and breaks his neck on a drink that Roger spilled, which makes him believe that his other senses are heightened. Since this has cheered up Roger, Klaus and Jeff decide to go with it and set up a fake terrorist hijacking of a train, which goes well. But when Roger enlists Jeff to take him down to the docks to fight crime for real, Klaus panics and rushes to stop him. Attempting to use Roger's cane to knock some sense into him, he is surprised when Roger intercepts the blow. He allows Roger to leap into a den of drug dealers, where he fights a terrific battle after Jeff cuts the lights. But when Jeff turns the lights back on, the drug dealers are unharmed and Roger has eviscerated himself.