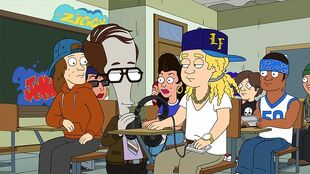 The Captain goes down with the ship

Stan-Dan Deliver
Roger becomes a teacher of a class of underprivileged kids. 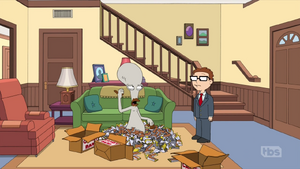 Steve gets dressed to sell chocolates for charity as Francine reveals that Stan keeps tight control of their cash so she is unable to buy any. Steve starts to head out but finds that Roger already ate them all. He rips into him for being selfish and Roger denies it in tears. At school, Steve is forced to explain to Principal Lewis that he no longer has the chocolates or the money so he is sent to a class with the troublemakers. He is quickly introduced to his new reality by his new classmates, but Roger arrives in time in the guise of the new teacher, Mr. Deliver, although Steve figures that things won't be going well.

As a teaching aid, Roger tries rap as Steve pulls him aside to let him know it won't work as well as letting him know that he's onto his scheme to prove he isn't selfish. Roger manages to convince the kids that he is both tough and a good dancer and to Steve's surprise, they buy into it, especially when he manages to teach them. Steve tries to get Roger kicked out of the school but Principal Lewis refuses to see the truth. Then Steve tries to frame Roger as a drunk, although Lewis drinks the planted booze. While teaching about the civil war, Lewis bursts in with reports of DUI's and discharges him. At a student's funeral, the kids set up a memorial for both their classmate and their teacher. Steve meets him later at home and tells him he didn't believe in him, but seeing the other kids changed his mind as they serenade him, although Lewis refuses to allow him in until he finds out that Steve can remove DUI's as well as adding them. Later in the empty classroom, Steve finds out that all of the kids were sent off to the Chinese army as Lewis leads a police chase and needs Steve's help again. 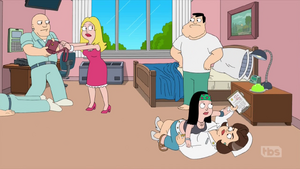 Meanwhile, Stan and Francine talk about their future retirement and thanks to Jeff's suggestion, decide to shop for retirement homes. At a home, Stan gets comfortable and decides to stay, but when he refuses to leave while on medication, the family want to free him although they are kicked out. Hayley tries to bring in a paralegal, but finds out that all he has to do is sign himself out. But when he does, the nurse announces that he has signed over all of his possessions to her. He reveals that he faked taking the medication in order to test the facility using his CIA skills. When the nurse reveals that he actually did sign over his belongings, he tries to beg to get them back without luck, but is saved when Klaus, who had been practicing archery earlier in the episode to give Stan and Francine Viking funerals, manages to set the papers on fire with a flaming arrow.

Retrieved from "https://americandad.fandom.com/wiki/Stan-Dan_Deliver?oldid=78857"
Community content is available under CC-BY-SA unless otherwise noted.