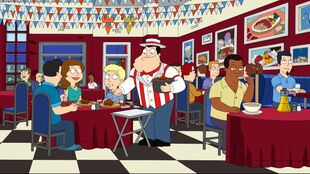 Stan's Food Restaurant
Roger offers to help Stan live out his dream of opening a restaurant until their different visions for what the eatery should be causes havoc. 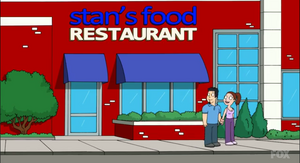 After complaining thought a meal out with Francine, Stan tells of finding happiness at a restaurant called Johnson's after his father left although the place blew up after his day there, leaving him unsatisfied ever since. Francine tries to talk Stan into making his dream of his own restaurant just like Johnson's come true but Stan is reluctant. Seeing Roger in another one of his schemes inspires Francine to have Stan ask for his help. Roger offers to help Stan live out his dream of opening a restaurant. Their first step is to acquire a bank loan but the loan officer hesitates to give Stan the money. Roger convinces them to give the loan promising to serve healthy food. As they prepare to open, Stan presents Roger with his idea's on how the restaurant should be operated and Roger appears to agree until the actual opening when Stan finds out the restaurant has been molded into Roger's dream. When he objects, Roger reveals that the bank loan was in his name and he controls the entire restaurant.

Dejected again, Francine takes Stan back to the scene of the original Johnson's and convinces Stan to try again without Roger's input. Stan gets a loan from Francine's parents and opens his new restaurant next door to Roger's. Business is slow at first until they find out Roger pranked their sign claiming the cooks have AIDS. A passing opera singer becomes so enraptured with the delightful food that his song of praise draws record crowds. Stan's success forces Roger out of business. While Roger congratulates Stan, he has set fire to Stan's restaurant, which also burns down Roger's. 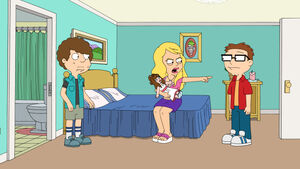 Meanwhile, Steve meets new girl Ashley who got kicked out of her previous school for having too much sex and she invites him over while her parents are out. She suddenly reconsiders, having planned on spending the day with her best friend Julie. Ashley considers again and asks Steve if he could bring a friend over for Julia and Steve agrees. When Steve and Snot arrive at Ashley's house, they find out Julia's a doll. When Ashley starts talking to the doll, Steve starts to protest until Ashley plants a big kiss on him. Snot is a lot more reluctant about the affair and threatens to leave until Steve reminds him he bought 11 chocolate bars for his school trip. Fed up when Steve asks him to take Julia out so that he and Ashley can make out, Snot tosses the doll onto a bed and goes to the bathroom. Ashley hears the noise and rushes in to find Julia's dress hiked up and Snot zipping his fly and accuses him of rape.

At school, a subdued Ashley tells Steve that Julia admitting being the aggressor with Snot but is now pregnant and wants to get an abortion. Snot reluctantly goes through the charade of taking Julia into an abortion clinic. When Ashley puts off having sex with Steve, Steve becomes determined to get rid of Julia. Steve goes to Ashley's house on the pretense of seeing Julia and they find Julia hanging from a noose. Ashley reads the suicide note and recognizes it's not in Julia's handwriting. Determined to find Julia's real killer, Ashley puts off having sex again and Steve leaves in frustration.