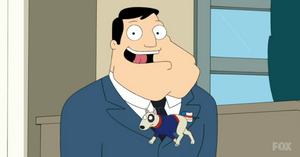 Spuds MacKenzie was a fictional dog created for use in an advertising campaign marketing Bud Light beer in the late 1980s. The dog first showed up in a Bud Light Super Bowl ad. By the end of the game, Spuds was a marketing success. During the height of his popularity, large amounts of Spuds merchandise was available, such as plush toys and t-shirts.

Spuds MacKenzie is ranked sixth on Stan's Top Ten Favorite Dogs he counts down in "The People vs. Martin Sugar".

Retrieved from "https://americandad.fandom.com/wiki/Spuds_MacKenzie?oldid=51732"
Community content is available under CC-BY-SA unless otherwise noted.