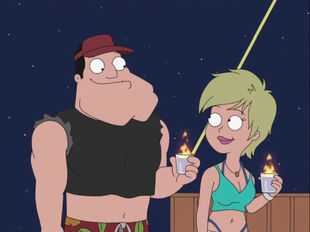 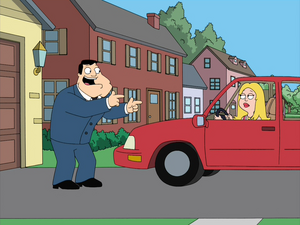 Stan is upset at Francine's half-hearted response to his playful banter. Francine claims that it is just becoming too dull for her. She goes out to visit her parents for the week leaving Stan depressed. Shortly after Francine leaves, Roger hastily tries to convince Stan to move into a motel for the week. Soon it becomes clear that Roger, under the name "Scotch Bingeington," is hosting a spring break party at their house and has already invited dozens of partygoers as he wishes to become the next "King of Spring Break." Stan tries to force the partiers to leave until he meets a rather enthusiastic young woman named Jessica who keenly responds to Stan's witty remarks. Stan takes an interest in this girl but feels it would be wrong to be with her due to the fact he is married. However, he quickly changes his mind when he receives a phone call from Francine on her first day away and does not acknowledge Stan’s statement of how he misses her after only one day.

Stan and Jessica party hard with everyone else and they begin to develop a rather close bond. When the week is up, Francine returns home to the party. She is outraged to see Stan with Jessica who is already prepared to head back to Rutgers. Stan, who is incredibly spiteful at how Francine finds his actions boring, leaves Francine and goes looking for Jessica. In her own spite, Francine complains about the situation to her mother only to be berated by her instead. Her mother actually supports Stan's position--in order for a marriage to work, both spouses must put all their efforts into making each other happy. Around this time, Stan manages to find Jessica but she, now sobered up, says that what she felt during spring break "wasn't real" because she was drunk leaving Stan feeling dejected. Stan and Francine meet up again in a coffee shop. They both apologize for their own behavior and patch things up. 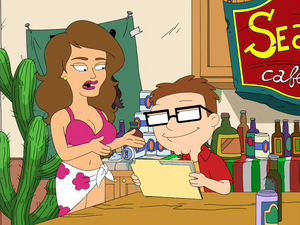 Meanwhile, Steve realizes that the presence of all the drunk girls at Roger's spring break party is another chance to lose his virginity. His target: Carmen Selectra, a reporter for MTV who came to broadcast the party. Carmen agrees to have sex with Steve but he stalls so he can get her complete medical history and is turned off after learning she has breast implants. Toward the end of the party, Carmen presents Roger with the crown that will make him King of Spring Break but he turns down the offer because he says that there is something lacking in his party. Carmen then announces to Steve that she had her implants removed so they can have sex. Unfortunately, the stage on which she is standing collapses and she is killed thus costing Steve another chance at losing his virginity. She apparently would've survived if she still had breast implants. Realizing that this is the element he was missing: A party's not a party until someone dies; Roger pulls a dented crown from the wreckage and proudly proclaims himself King of Spring Break.