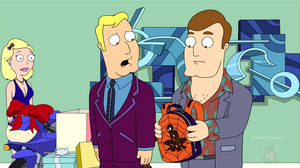 Spider-Man is a fictional Marvel Comics superhero created by writer and editor Stan Lee and artist and co-plotter Steve Ditko. He first appeared in Amazing Fantasy #15 in 1962.

Roger gets Greg and Terry's newly adopted Russian orphan, Michael, a Spider-Man backpack as a welcoming gift in "A Boy Named Michael". But when he sees the expensive gifts the other guests have given, he becomes embarrassed and tries to remove it from the room. Greg and Terry intercept it, and after finding the clown wrapping paper as "kitsch", puzzle over the character as Stan embarrasses Roger further by trying to demonstrate Spider-Man's climbing ability by spreading cheese dip on his hands to climb the wall of Greg and Terry's house.

Stan and Francine encounter a Spider-Man knockoff outside of the Chinese Theatre in "A Star Is Reborn".

Roger discovers that Francine has multiple Spider-Man vibrators in "The Chilly Thrillies".

Retrieved from "https://americandad.fandom.com/wiki/Spider-Man?oldid=91748"
Community content is available under CC-BY-SA unless otherwise noted.