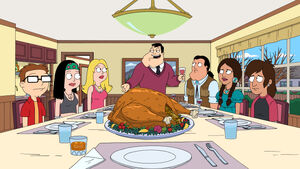 Sooleawa'Uha is the wife of Stan Smith's half-brother, Rusty, and the mother of their son, Glenn.

In "There Will Be Bad Blood", Stan originally believes them to be poor and makes a show of inviting them to Thanksgiving each year to show off his belongings. Francine also tries to impress Sooleawa'Uha with her kitchen. They find out that Rusty and his family are rich, and Francine finds out that not only does Sooleawa'Uha have a much larger kitchen but it has chefs to prepare the meals as well.

Sooleawa'Uha is voiced by Tonantzin Carmelo.

Retrieved from "https://americandad.fandom.com/wiki/Sooleawa%27Uha?oldid=58867"
Community content is available under CC-BY-SA unless otherwise noted.