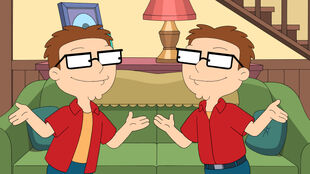 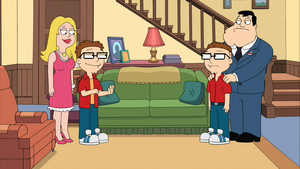 During a memorial service for the 96 people killed in the bus crash in "100 A.D.", Stan learns that Duper made a clone of himself. When Francine and Stan have a clash over how to raise Steve; Francine wishes to be more attentive, but Stan is still firm that they need to be firm with him. They decide to have a BMX race to determine how to raise Steve. Stan falls down and severely injures himself at the start of the race, making Francine the winner. Stan creates a clone of Steve, Francine and Stan compete with each other to determine who has better parenting skills. Francine raises the original Steve very passively, but Stan raises Steve's clone, Steve-arino very strict and manly. Francine's parenting ends up turning Steve into a slovenly spoiled brat with no desire to do anything whatsoever, while Stan's parenting makes Steve-arino incredibly athletically adept and successful at school. However, it later turns out that Steve-arino was a psychopath that committed various acts of animal cruelty and had kidnapped Steve with the intention to kill him, along with all the city's cats being held at a magazine factory. When Stan admits he was too hard on Steve-arino and agrees to let him do what he wants, Steve-arino wants to kill Steve. forcing Stan to fight him. During the fight, Francine frees the captive cats who attack Steve-arino, forcing him out a window. When they free Steve, Francine turns on his ungratefulness and agrees with Stan to be firmer while Stan agrees to lighten up. Just then, Steve-arino attacks Stan with the intent of continuing his plan to kill Steve. While Steve-arino chases Steve around, Stan shoots a fuel tank, smashing Steve-arino into a warehouse wall. As they leave, Steve-arino comes to and reaches for a gun, only to have a cat that resembles Simon from "Choosy Wives Choose Smith" reach it first and shoot him. 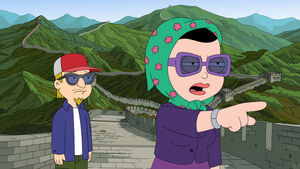 Meanwhile, Roger tracks down the AWOL bride and groom in Thailand in order to steal the money that Stan gave Jeff by means of making an annoying noise in the presence of Hayley and Jeff. Although they attempt to ignore it at first, they soon flee, with Roger reappearing at every place they turn. At the Great Wall of China, They finally give Roger the remaining money but he discovers that Hayley and Jeff spent almost all the money trying to escape from him. He then moves on to his next adventure, though he falls off the Great Wall.