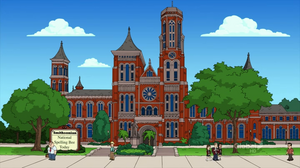 The Smithsonian Institution is an educational and research institute and associated museum complex, administered and funded by the government of the United States and by funds from its endowment, contributions, and profits from its shops and its magazines. Most of its facilities are located in Washington, D.C., but its 19 museums, zoo, and nine research centers include sites in New York City, Virginia, Panama, and elsewhere. It has over 136 million items in its collections.

In Washington D.C. the following museums are all part of the Smithsonian collection of museums: 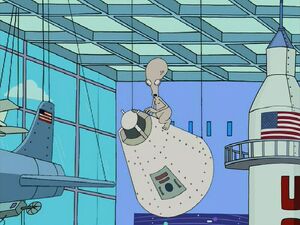 Roger takes in an exhibition of the television show Dynasty at the Smithsonian in "Roger Codger". The would most likely be shown at the National Museum of American History, however, when fleeing the CIA, Roger runs though elements of National Museum of Natural History and National Air and Space Museum which are housed in separate buildings.

Stan fantasizes becoming immortal though discovering Oliver North's hidden gold and displaying it at the Smithsonian in "Stanny Slickers 2: The Legend of Ollie's Gold".

Steve Smith and Akiko Yoshida face off in the National Spelling Bee at the Smithsonian in "Spelling Bee My Baby".

Stan steals the original Spirit of Saint Louis aircraft from the Smithsonian in "Fight and Flight" in order to "aid" Steve in his presentation on Charles Lindbergh.